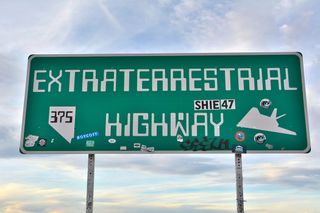 Repeated reports of UFO sightings along Nevada's State Highway 375 — which is close to the top-secret Area 51 government base — led Nevada officials to dub the route "Extraterrestrial Highway" in 1996.
(Image: © Shutterstock)

The U.S. government has been secretly investigating unidentified flying objects — UFOs — since 2007. And despite officials' claims that the classified UFO-hunting effort shuttered in 2012 after funding evaporated, the group is still active, The New York Times reported Saturday (Dec. 16).

Known as the Advanced Aerospace Threat Identification Program (AATIP), the initiative was launched by the U.S. Department of Defense in 2007 and operated with an annual budget of $22 million from 2008 to 2011, the Times discovered during a recent investigation.

Pentagon officials revealed that the program existed, but added that it ceased to operate in 2012, the Times reported. However, the former leader of the program said that AATIP remained active in the years since; he continued to oversee the effort until he resigned in October — citing the department's "excessive secrecy and internal opposition" as the cause — and he was succeeded after his departure, according to the Times. [7 Things Most Often Mistaken for UFOs]

Under the program, aerospace experts investigated and described sightings and video recordings of mysterious objects that defied easy explanation; they also conducted tests on people who reported glimpsing UFOs, to see how they might have been affected by the experience, according to the Times.

One video example — the time and date of which was withheld by government officials — showed a fast-moving, spinning and glowing aircraft, recorded midair by Navy pilots in an F/A-18 Super Hornet, the Times reported.

The nascent program was ushered into existence by Nevada Democratic Sen. Harry Reid, then the Senate majority leader. His interest in UFOs was piqued by conversations with billionaire entrepreneur Robert Bigelow, whose aerospace company was tapped to conduct much of the research for AATIP's UFO sightings, Reid told the Times.

Reid further explained that he had also spoken about UFOs years earlier with astronaut John Glenn, the Times reported. Glenn suggested to Reid that the government should take a closer look at reports of UFO sightings by members of the military service; these reports were often not widely shared, because people who saw UFOs thought that no one would believe them.

Reid referred to the proposed budget for AATIP as "black money," a special type of budget maintained by the Pentagon for classified programs, and one that was not debated publicly by Senate members, according to the Times.

UFO sightings have been investigated by government agencies since the 1940s, and in January 2016, the CIA released a number of previously classified documents describing some of the most unusual UFO encounters on record, most of which took place in the 1950s.

But belief in UFOs is still widespread; according to a survey conducted in 2012, an estimated 80 million people in the U.S. think that UFOs are real, and 1 in 10 responders claimed to have personally witnessed what they describe as an extraterrestrial spacecraft.

In an interview, the now-retired Reid said that he was "not embarrassed or ashamed or sorry" to have pushed for the investigation of potential threats posed by UFOs, according to the Times.

"I think it's one of the good things I did in my congressional service. I've done something that no one has done before," Reid said.