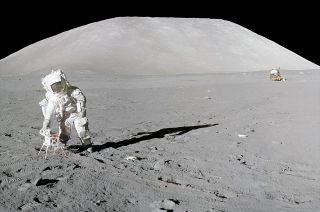 Apollo 17 astronaut Harrison Schmitt, seen here during the first of his three moonwalks in December 1972, has begun to release his diary of the last lunar landing mission 45 years later.
(Image: © NASA)

Harrison Schmitt went for a walk on Dec. 11, 1972. Forty-five years later, he is almost ready to share his diary of that day.

The last of the twelve NASA astronauts to step foot onto the surface of the moon — and the only geologist to do so — Schmitt was the lunar module pilot on NASA's Apollo 17 mission, the sixth, last, and as Schmitt puts it, "most recent human visit to the moon." Now, on the 45th anniversary of his lunar journey, Schmitt is beginning to take the public on a stroll through history, his memories and the findings that came from exploring Taurus Littrow Valley on the moon.

"This project began 45 years ago," explains Schmitt. "I am gradually getting to the point where the drafting, I think, is good enough that I can let other people share in what my impressions were during the mission, as well as what the whole operation was about." [The Apollo Moon Landings: How They Worked (Infographic)]

"Apollo 17: Diary of the Twelfth Man" quietly debuted as a new section of Schmitt's website in early November when he uploaded the fourth chapter, "30 Days and Counting." Although the first through third chapters still remain to be published, Schmitt chose the fourth to begin "because the interval between its online publication date and the launch date coincides with the chapter title," he wrote in a note to accompanying the post.

On Friday (Dec. 7), 45 years to the day after he lifted off with Apollo 17 commander Eugene Cernan and command module pilot Ronald Evans, Schmitt posted the diary's fifth chapter, "30 Seconds and Counting!" — an almost 49,000 word account of the Saturn V launch that follows Schmitt and his crewmates from the ground to leaving Earth orbit for the moon.

"[Seven and a half] 7.5 million pounds of thrust would lift us slowly at first and then faster and faster toward orbit on a trail of brilliant flame, not visible to us but splitting open the night for everyone below," recounts Schmitt. "Pulsing waves of sound and searing streams of light buffeted the bodies and minds of onlookers, bringing spontaneous and unexpected hugs, cries and tears."

The Apollo 17 launch marked the first time NASA had sent astronauts into space at night.

"Once again, a life-tipped pillar of fire, the Saturn rocket, a massive tribute to boldness and imagination, became a blazing symbol of human potential for greatness. Except for reflected light coming through the small window in front of Gene and another in the boost protective cover over the [crew] hatch, I had only a vague sense of the brilliant flame beneath us," writes Schmitt.

Schmitt pulls from a wide variety of sources for the content of the diary. Amid his own observations, Schmitt cites from NASA air to ground radio transcripts, public affairs reports and the recollections of others. He has also formatted the journal to help readers keep track of the topics at hand.

"A complication to reading diaries is their instantaneous jump from subject to subject. In addition to the liberal use of endnotes, distinguishing between subjects and sources is aided by the consistent use of different font styles and colors in the text," Schmitt explains in his preface.

For example, Schmitt turns the text red when discussing anomalies, or problems, during the mission. He uses blue when writing of Earth observations and he uses purple for views about the moon. He reserves turquoise for "probable dialog" between he and his two crewmates, as he can best derive from his memory.

"On the horizon, bands of orange and blue lay below the black of space," Schmitt writes, describing — in blue text — and captioning a photograph of his first view of Earth from space. "Outside, darkness finally had been broken by a spectacular sunrise that had provided what I described a few minutes later as 'the biggest rainbow I'd ever seen,' extending along the entire pre-sunrise horizon."

"Like childhood's home, we really see the Earth only as we prepare to leave," waxes Schmitt.

"It [the diary] is both technical and philosophical, in some aspects," Schmitt told collectSPACE.

Schmitt, who is now 82, logged a total of 75 hours on the lunar surface, including 22 hours out on three moonwalks. With Cernan's death in January, Schmitt became the final living member of the Apollo 17 crew (Evans died in 1990).

Although 45 years have already passed for Schmitt to feel ready to prepare and share the diary, he still sees it as a "long-running project" that will not be completed within just the 12-day span of the mission.

"The 45th anniversary seemed like a good time to begin," he said. "It is going to take a long time still. There is a lot to be said."