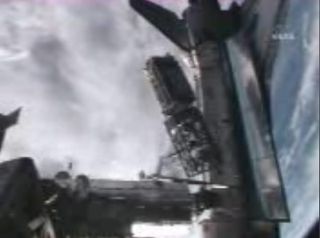 STS-117 astroanuts pluck the Starboard 3/Starboard 4 trusses and solar arrays out of the payload bay of NASA's space shuttle Atlantis after docking at the International Space Station on June 10, 2007.
(Image: © NASA TV.)

A pair ofspacewalking astronauts will head outside the International Space Station (ISS)Monday to install a pair of massive girders and two new solar wings to boostthe outpost’s power grid.

“[W]e’ll bebalancing out the station with the solar arrays on that side,” Reilly said in aNASA interview. “And that’s our primary, and relatively simple, objective, whenyou look at it from that standpoint.”

Working inconcert with robotic arm-wielding astronauts inside the space station, Reillyand Olivas will install the joined Starboard3/Starboard 4 (S3/S4) trusses and arrays which, once extended to their full240-foot (73-meter) wingspan, will increase the space station’s power supply. At35,678 pounds(16,183 kilograms), they make up the heaviest addition to the ISS to date.

“We’ll havemuch more redundancy in the power system,” Kirk Shireman, NASA’s deputy ISSprogram manager, said Sunday of the S3/S4 installation. “And we’ll be in abetter configuration for later on in building the space station.”

The newsolar arrays, which ultimately produce about 14 kilowatts of usable power, willboost the station’s power capacity up by about seven kilowatts once an oldersolar wing is furled later in the mission, Shireman said. Its installation willhelp the ISS power future modules and laboratories waiting to fly.

?“The planis to check after every task, so you do a task and you check your glove,”Shireman said. “We’re optimistic that we won’t have any damage, but that’scertainly going to be the procedure from now on.”

The primarytasks of today’s truss and solar wing installation are a near-mirror image ofthose performed during NASA’s STS-115 shuttle flight, which delivered the Port3/Port 4 (P3/P4) trusses and solar arrays to the port side of the ISS inSeptember 2006.

But Reillyand Olivas will have a newtool at their disposal that their STS-115 predecessors did without - atorque multiplier - that amplifies by 12 times the amount of force applied by aspacewalker on stubborn bolts. In order to fully prepare the S3/S4 truss foruse at the ISS, the spacewalkers must complete remove or unlock a series ofbolts, restraints and launch locks no matter how tightly secured they may be.

“We’regoing to be able to install S3/S4 even more flawlessly that the way P3/P4 wentup,” Olivas said in a NASA interview.

Like itsportside counterpart, the two separate elements of the S3/S4 truss structure isjoined at the midpoint by a massive joint that allows the outer S4 section torotate like paddlewheel so that its solar arrays can track the Sun. The arraysthemselves are due to be unfurled on Tuesday.

The inner,S3 element will be attached to the space station’s Starboard 1 element -- thereis no Starboard 2 section -- via the station’s robotic arm, wielded by formerISS flight engineer Sunita Williams and shuttle pilot Lee Archambault, at about11:08 a.m. EDT (1608 GMT) before the spacewalkers exit the station’s Questairlock. Shuttle astronauts plucked the S3/S4 truss out of Atlantis’ cargo baylate Sunday, at times with only inches separating it from the shuttle’s innerwalls, using the orbiter’s arm to then hand it off to the station’s ownappendage.

“It isdelicate work, and the tolerances are small, but we have good aids on board,”Archambault has said of today’s truss installation.

Reilly, aveteran spacewalker, will make the fourth extravehicular activity (EVA) of hisastronaut career during today’s orbital work and will wear red-stripedspacesuit. Olivas, meanwhile, is making his first spacewalks, as well as hisfirst spaceflight, during the STS-117 mission and will don an all-whitespacesuit.