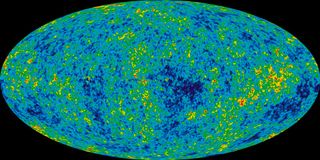 A team of researchers who helped shape our understanding of the origin, evolution and nature of the cosmos is now $3 million richer.

Those folks worked on NASA's WMAP space mission, which was awarded the 2018 Breakthrough Prize in Fundamental Physics today (Dec. 3) during a ceremony in Palo Alto, California.

From 2001 to 2009, WMAP mapped the cosmic microwave background (CMB) — the light left over from the Big Bang — with unprecedented precision. This work allowed scientists to nail down the age of the universe (about 13.8 billion years), its rate of accelerating expansion (roughly 70 kilometers per second per megaparsec) and its basic composition (about 5 percent "normal" matter, 24 percent dark matter and 71 percent dark energy). [Dark Matter and Dark Energy: The Mystery Explained (Infographic)]

Astronomers had gotten pieces of this overall picture before, from a variety of different observations. But WMAP — which is short for Wilkinson Microwave Anisotropy Probe — allowed them to put everything together, said mission principal investigator Chuck Bennett, who's based at Johns Hopkins University in Maryland.

"I think the big impact of WMAP was to go from a kind of collection of miscellaneous facts and approximate numbers to a single theory or model that says, 'Here's exactly what's going on. Here are the numbers,'" Bennett told Space.com. "And everything agrees with them — all the different, diverse measurements."

"I see the legacy as establishing the standard model and making cosmology quantitative," Spergel told Space.com. "There have been improvements in the measurements since WMAP, but I think we provided a very solid base that the field is building on."

Those improvements were provided largely by the European Space Agency's Planck spacecraft, which mapped the CMB from 2009 to 2013. Planck's data have reinforced and refined, rather than challenged, the WMAP results.

"It's impressive that these independent experiments get the same answer — that feels good," Spergel said. "And we get consistent measurements from the ground."

Bennett, Spergel and three other WMAP leaders — Gary Hinshaw of the University of British Columbia and Norman Jarosik and Lyman Page Jr. of Princeton — will get the largest slices of the $3 million award, Breakthrough Prize representatives said. The rest will be split among the other 22 members of the mission's experiment team.

This is not the first time WMAP has been recognized for its contributions to physics and cosmology. The mission team also won the prestigious Shaw Prize for Astronomy in 2010 and the Gruber Prize in Cosmology in 2012.

The Breakthrough Prize in science and math was founded in 2012 by Mark Zuckerberg and Priscilla Chan, Sergey Brin, Anne Wojcicki and Yuri and Julia Milner. Every year, it awards $3 million prizes in the fields of Fundamental Physics, Life Sciences and Mathematics — the largest individual monetary awards in science. (For comparison: Each 2017 Nobel Prize was worth 9 million Swedish kronor, or about $1.1 million at current exchange rates.)

The WMAP researchers were therefore not the only people to be recognized at today's ceremony, which was hosted by Morgan Freeman and featured appearances by actors Mila Kunis and Ashton Kutcher and hip-hop artist Wiz Khalifa, among other celebrities. Also announced were five $3 million prizes in the Life Sciences field and one $3 million award in the Mathematics field, as well as several smaller purses in other categories. You can read about all the winners here: https://breakthroughprize.org/News/41

"The idea that science is important, science is something that shapes our understanding of the universe that we live in, and that this is recognized — hopefully it motivates schoolkids and generates public interest in support of science," Bennett said.