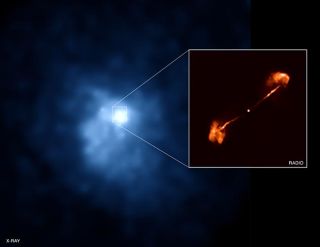 An X-ray image of the galactic cluster 3C438, with inset showing a powerful radio galaxy.

To thenaked eye, galactic cluster 3C438 looks like any other patch of starry sky. Butthe Chandra space telescope?s X-ray vision paints an extremely differentpicture?bursting from the cluster?s center is a cloudof energy equivalent to 1 billion exploding Suns, an event that may beuniverse?s most energetic ever detected.

Astronomerswho made the discovery have whittled down the cause of the cosmic energy burstto two suspects. They think either two dense galaxies are colliding at 4million mph, or a super-massive blackhole is swallowing the mass of 100 stars each year.

?In eitherscenario, this is one of the most extreme events in the local Universe,? theastronomers write an upcoming edition of the Astrophysical Journal. Atmore than 13 times hotter than the Sun?s core, the energies found in thecluster rival even the enormous energies seen pouring out of the "bulletcluster."

RalphKraft, astrophysicist at the Harvard-Smithsonian Center for Astrophysics in Massachusetts and co-author of a study on the finding, said the burst is equivalent to the?explosion of an entiregalaxy worth of stars all at once.?

Radio telescopeimages of the cluster reveal a more complex story: two mushroom-cloud-likejets spouting from either side of a glowing hotspot, representing a radiogalaxy. When superimposed on the X-ray image, the structure sits at the centerof an intense energy cloud.

But is theradio galaxy the smoking gun for the cluster?s observed heat? Kraft and hiscolleagues remain unconvinced. It is "too weak? and can?t account for thelarge spread of intense energy, according to the study.

?We?rewitnessing the collision of two very massive clusters into each other,? he toldSPACE.com. ?This is the only thing that could release that much energy.?