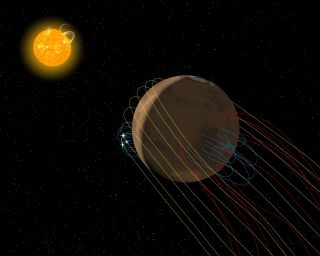 Mars' magnetic field stands apart in the solar system because it gets twisted by interactions with solar particles, a NASA spacecraft discovered. What's more, the Red Planet also could have lost its atmosphere through the same process.

Mars today has a thin carbon dioxide atmosphere, and the pressure on the surface is too low for water to flow. But the planet's environment was different in the ancient past: Rovers and spacecraft have seen extensive evidence of rivers, ancient stream beds and possible oceans.

While researchers are still trying to understand why Mars lost its atmosphere, a leading theory is that particles streaming from the sun pushed the lighter molecules out from the atmosphere during the Red Planet's 4.5-billion-year-old history. That's what NASA's MAVEN (Mars Atmosphere and Volatile Evolution) spacecraft has been tracking since it began its primary science mission in November 2014. This week, scientists announced MAVEN found a twisted magnetic tail trailing behind Mars. [How NASA's MAVEN Mars Orbiter Works (Infographic)]

"We found that Mars' magnetic tail, or magnetotail, is unique in the solar system," Gina DiBraccio, a research astrophysicist at NASA’s Goddard Space Flight Center in Maryland, said in a statement.

"It’s not like the magnetotail found at Venus, a planet with no magnetic field of its own, nor is it like Earth's, which is surrounded by its own internally generated magnetic field. Instead, it is a hybrid between the two," added DiBraccio, who is also a project scientist for MAVEN.

The connecting fields could also hurl some electrically charged particles (or ions) from Mars' upper atmosphere into empty space. Since ions flow along magnetic field lines, the magnetotail provides a pathway for them to flow out of the atmosphere. The process of magnetic reconnection also releases energy, which could give the Martian atmospheric ions a boost into space.

This process is just one example of the complexity of the Red Planet's magnetic fields. MAVEN has spent its mission tracking the changes in the field, which includes the spacecraft changing its orientation with respect to the sun. The spacecraft's different positions in space provide a more complete map of the magnetotail and how it changes after interactions with the solar wind.

MAVEN tracked the magnetic fields using its magnetometer instrument. The team plans to look at the data from other instruments on the spacecraft to see where escaping particles go. The aim is to confirm the escaping particles follow the connected magnetic fields, which would show that the fields contribute to the process of atmospheric loss, NASA officials said in the statement.

MAVEN scientists want to know how much atmosphere is lost through magnetic reconnection, as well as how the magnetic tail changes as Mars and its surface magnetic regions rotate. "Mars is really complicated, but really interesting at the same time," said DiBraccio.

DiBraccio will present the research Thursday (Oct. 19) at the annual meeting of the American Astronomical Society's Division for Planetary Sciences in Provo, Utah.