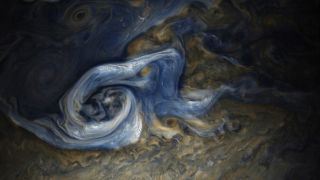 An enormous storm on Jupiter appears in a striking new image from the Juno spacecraft, taken when Juno was 6,281 miles (10,108 km) from the planet's cloud tops. The image scale is 4.2 miles/pixel (6.7 km/pixel).
(Image: © NASA/JPL-Caltech/SwRI/MSSS/Gerald Eichstädt/Seán Doran)

The new image was taken on Oct. 24 during Juno's ninth close flyby of the gas giant planet. The swirling clouds are a massive, raging storm in Jupiter's northern hemisphere, according to a statement from NASA.

"The storm is rotating counterclockwise with a wide range of cloud altitudes. The darker clouds are expected to be deeper in the atmosphere than the brightest clouds," NASA officials said in the statement. "Within some of the bright 'arms' of this storm, smaller clouds and banks of clouds can be seen, some of which are casting shadows to the right side of this picture — sunlight is coming from the left." [Photos: NASA's Juno Mission to Jupiter]

The raw image data from the JunoCam instrument were uploaded to the JunoCam website and then processed by citizen scientists Gerald Eichstädt and Seán Doran to create the new color-enhanced image above.

The vibrant cloud tops and shadows vary in size, ranging from about 4 to 8 miles (7 to 12 kilometers) in both width and length. These clouds captured in the northern hemisphere are similar to smaller clouds found in other areas that Juno has photographed. Both the small and large clouds are believed to be updrafts of ammonia ice crystals, possibly mixed with water ice, according to the statement.

During each close approach, Juno studies a particular region of Jupiter. At the time the new image was captured, the space probe was approximately 6,281 miles (10,108 km) above the planet's cloud tops, at 41.84 degrees north latitude, NASA officials said in the statement.

In addition to spotting giant cyclone storms, Juno has also observed powerful auroras in Jupiter's skies. The probe is expected to continue studying the gas giant planet from orbit through at least February 2018.

Learn more about the JunoCam data and citizen science work at www.missionjuno.swri.edu/junocam.