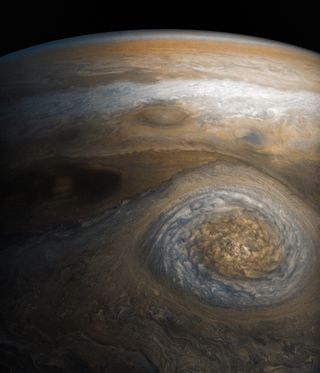 A giant cyclone swirls near the north pole of Jupiter in a gorgeous new photo by NASA's Juno spacecraft.

"This storm is a long-lived anticyclonic oval named North North Temperate Little Red Spot 1 (NN-LRS-1); it has been tracked at least since 1993, and may be older still," NASA officials wrote in an image description. (Yes, the double "North" is correct.) "An anticyclone is a weather phenomenon where winds around the storm flow in the direction opposite to that of the flow around a region of low pressure."

NN-LRS-1 is Jupiter's third-largest anticyclonic oval and is usually about 3,700 miles (6,000 kilometers) wide, NASA officials added. (The gas giant's biggest storm, the famous Great Red Spot, is currently about 10,000 miles, or 16,000 km, wide, though it's been shrinking over the years.) [In Photos: The Most Powerful Storms in the Solar System]

Anyone who wishes to do so can process JunoCam data into new imagery. To learn more, go to https://www.missionjuno.swri.edu/junocam

The $1.1 billion Juno mission launched in August 2011 and arrived in orbit around Jupiter in July 2016. The spacecraft is studying Jupiter's composition and interior structure, gathering data that should help scientists better understand how planets and solar systems come together, mission team members have said.

Juno collects most of its data during close flybys like the July 10 encounter, which zoomed directly over the Great Red Spot. The probe cruises around Jupiter in a long and highly elliptical orbit, so such flybys occur every 53.5 days. The next one will take place on Friday (Sept. 1).

If all goes according to plan, Juno will continue studying Jupiter from orbit through at least February 2018.