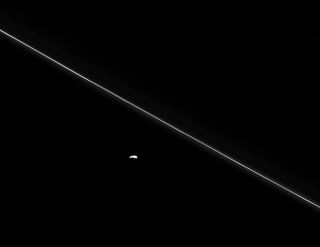 NASA's Cassini mission to Saturn came to an end on Sept. 15, 2017 when the spacecraft dove into Saturn's atmosphere. As Cassini headed for its final moments , it turned back from the planet to point its cameras at Saturn's moon Pandora and the faint F ring.

Before Cassini's trek through the Saturnian system, popular models held that Pandora and Prometheus, two of Saturn's moons, created the F ring's bizarre, narrow structure with their gravitational pull. However, data from Cassini proves otherwise.

"Recent models, supported by Cassini images, suggest that it is Prometheus alone, not Pandora, that confines the bulk of the F ring, aided by the particular characteristics of its orbit," NASA officials said in a statement. The gravity of Pandora and Prometheus combined is responsible for stirring the ring material into a chaotic state, which creates the braided and kinked structure seen in the ring, NASA officials said. [The Biggest Mysteries of Saturn ]

Cassini grabbed this image on Sept. 14 when the spacecraft was 360,000 miles (577,000 kilomeers) from Pandora and 28 degrees above Saturn's ringplane.

The Cassini mission lasted 20 years , with 13 of those spent traversing Saturn and its rings and moons . The mission was a cooperative project with NASA, the European Space Agency and the Italian Space Agency.