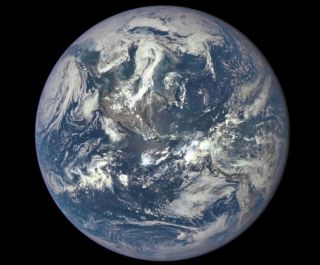 A NASA camera on the Deep Space Climate Observatory satellite captured its first view of the entire sunlit side of the spherical planet Earth, on July 6, 2015.
(Image: © NASA)

New research is shedding light on the potential consequences of geoengineering the planet.

Among the most prominent technological proposals for cooling Earth's atmosphere involves spraying aerosols into the sky to reflect some of the sun's incoming radiation back into outer space. That approach, in a sense, has already been tested in nature. Big volcanic eruptions have cooled the planet by injecting ash into the atmosphere. The Mount Pinatubo eruption in 1991, for example, cooled the planet by 1 degree Fahrenheit for 15 months.

Reducing hurricane activity in the Atlantic might sound like a positive, knock-on benefit. But it comes with other likely consequences.

"That sounds beneficial after the hurricane season we've just had," Anthony Jones of the University of Exeter, one of the paper's authors, told Seeker. "But if you just inject into the north, you also increase the risk of drought in the Sahel."

RELATED: A Geoengineering 'Cocktail' Could Dull the Pain of Climate Change

The Sahel is a region in Africa bordering the Sahara Desert and is prone to acute drought. The United Nations said in 2012 that 15 million people were malnourished in West Africa and the Sahel primarily due to drought.

Jones said the risks of geoengineering — much like the damage of climate change — aren't evenly distributed around the earth.

"Geoengineering regionally and unilaterally could have dire consequences for other parts of the planet," Jones said.

Despite the risks, scientists who study geoengineering suggest the process may buy crucial time for humanity to transition away from carbon-intensive economies that are the cause of global warming.

Some of those who study geoengineering compare the idea to a painkiller that may be beneficial in the short term, but not a good long-term solution. For a patient with a life-threatening illness, a painkiller might ease the suffering, but it won't cure the disease.

A group of researchers at Harvard has been gearing up in recent months to carry out the world's first field studies of geoengineering.

"The idea that you could even think about adjusting the temperature of the planet is terrifying," Frank Keutsch, one of the Harvard scientists, told Seeker earlier this year. "But the consequences of climate change are also quite terrifying. This is a very serious subject."