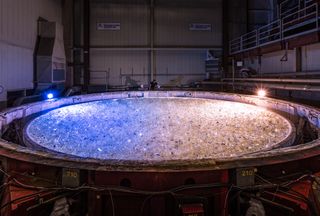 The construction of a highly anticipated mega-telescope is proceeding apace.

When the GMT is complete, it will integrate seven of these 20-ton, 27.6-foot-wide (8.4 meter) mirrors into a single light-collecting surface 80 feet (24.5 m) across. The resulting instrument will have 10 times the resolving power of NASA's iconic Hubble Space Telescope, GMT representatives have said. [Photos: Casting Mirror No. 5 for the Giant Magellan Telescope]

"Creating the largest telescope in history is a monumental endeavor, and the GMT will be among the largest privately funded scientific initiatives to date," Taft Armandroff, vice chairman of the Giant Magellan Telescope Organization (GMTO) corporation board of directors, said in a statement.

"With this next milestone, and with the leadership, technical, financial and scientific prowess of the members of the GMTO partnership, we continue on the path to the completion of this great observatory," added Armandroff, an astronomy professor and director of the McDonald Observatory at the University of Texas at Austin.

The mirror-casting process involves placing 20 tons' worth of borosilicate glass chunks in a special rotating furnace outfitted with a honeycomb-like mold. This furnace is heated to 2,129 degrees Fahrenheit (1,165 degrees Celsius) for about four hours, until the glass melts and fills the mold.

But that's just the beginning. The glass stays in the mold for three months, cooling down while the furnace continues to spin (but at a slower rate). The mirror is then shaped and polished with incredible precision, until the surface of the finished product is perfected to within 20 nanometers — about the thickness of a single glass molecule.

As you might imagine, this is painstaking, time-consuming work.

Mirror number one is completely finished, and it was moved out of the Mirror Lab to a storage facility near Tucson International Airport in September. Mirrors two through four are in various stages of work.

A very large eye on the sky

The mirrors are ultimately bound for South America — specifically, Las Campanas Observatory in northern Chile, where the $1 billion GMT is being built.

The current plan calls for GMT to begin observing the heavens in 2023, with just four of the seven primary mirrors. These initial operations will involve lots of engineering checkouts, but the team anticipates doing some high-impact science at the same time as well.

"With four mirrors, we'll still be the largest telescope in the world by a factor of two," GMTO vice president for operations and external relations Pat McCarthy told Space.com. "In many respects, we'll have a good fraction of our full capability."

If everything goes according to plan, GMT will get up to full strength with seven primary mirrors in 2025 — and then keep studying the cosmos for decades. The telescope's design lifetime is 50 years, Shelton said, and it will be continually upgraded over that span with new and better instruments.

GMT will perform a variety of observations once it's up and running. For example, astronomers will use the telescope to detect and characterize exoplanets, even searching the atmospheres of relatively nearby alien worlds for possible signs of life. GMT will also help researchers study the universe's first galaxies, and probe the nature of mysterious dark matter and dark energy, project representatives have said.

And then there's the excitement of the unknown.

"Things will come up that we can't even anticipate," Shelton said.

GMT won't be the only mega-scope doing such work. Two other big telescopes are scheduled to come online in the same general time frame: the European Extremely Large Telescope, which will also be built in the Chilean Andes, and the Thirty Meter Telescope, which will sit near the summit of Hawaii's Mauna Kea volcano, provided protests don't derail that plan.