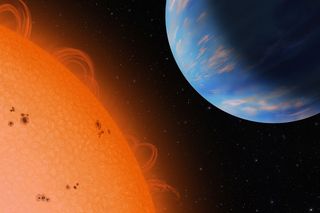 An artist's concept of the Neptune-sized planet GJ436b (right) orbiting an M dwarf star, Gliese 436, at a distance of only 3 million miles. With a density similar to that of Neptune, the exoplanet is an ice giant and probably has a rocky core and lots of water that forms ice in the interior under high pressure and temperature.
(Image: © Copyright Lynnette Cook)

HONOLULU?Astronomershave discovered 28 new planets outside of our solar system, increasing to 236the number of known exoplanets, revealing that planets can exist around a broadspectrum of stellar types?from tiny, dim stars to giants.

?We added12 percent to the total in the last year, and we?re very proud of that,? saidone of the study team members Jason Wright of the University of California atBerkeley. ?This provides new planetary systems so that we can study theirproperties as an ensemble.?

The planetsare among 37 new objects spotted within the past year. Seven of the objects arefailed stars called brown dwarfs,with masses that dwarf the largest, Jupiter-sized planets but too small to sustain thenuclear reactions necessary for stellar ignition.

JohnJohnson of the University of California at Berkeley and his colleaguespresented the findings here today at a meeting of the American AstronomicalSociety (AAS).

Astronomersdon?t directly spot extrasolar planets, but rather look for stellarwobbles caused by orbiting planets. The planet?s size and distance from theparent star affect how strong or weak of a wobble, and more sophisticatedtechniques for measuring the stellar wobbles has led to an ever-lengtheninglist of such outer planets. Now they can detect wobbles of a meter per secondcompared with the 10-meter limit just 15 years ago.

One of the exoplanets,orbiting a red M dwarf just 30 light-years from Earth, was discovered two years ago, butrecent observations have allowed astronomers to pin down its mass, radius anddensity. The ice-giant planet circles the star Gliese 436 (GJ 436) and has aradius and density that are surprisingly similar to that of Neptune.

Weighing inat 22.4 Earth-masses, the exoplanet is the first Neptune-sized planetobserved to transit a star. The previous record holder, dubbed HD 140926b,weighed in at 100 Earth masses, and Jupiter is 320 Earth masses.

?[Gliese436b] must be 50 percent rock and about 50 percent water, with perhaps smallamounts of hydrogen and helium,? said head of the planet-search team GeoffreyMarcy, also of UC Berkeley. ?So this planet has the interior structure of ahybrid super-Earth/Neptune, with a rocky core surrounded by a significantamount of water compressed into solid form at high pressures and temperatures.?

Its 2.6-dayorbit around GJ 436 means the hybrid planet circles very close to its star, just3 percent of the Sun-Earth distance, and making it a hot Neptune. Unlike mostgiant planets found with such close ties to their stars, this planet has aneccentric orbit. The elongated orbit suggests the parent star could haveanother planetary companion with a more distant orbit.

?I?m surepeople will immediately follow up and try to measure the atmosphericcomposition of this planet,? Wright said.

GJ 436 isan M star and 70 percent of all stars are considered M-type stars, so findingthat these dim stars can support planets could mean a boon for planet hunters.

At leastfour of the newly spotted planets belong to multiple-planet systems, supportingthe idea that at least 30 percent of all planet-parent stars have more than oneplanetary companion. Since smaller planets and those outside our solar systemare trickier to detect, Wright predicts this percentage will continue to riseas detection methods improve.

And threeof the just-discovered planets circle starsthat boast masses between 1.6 and 1.9 times that of our Sun. Planets orbiting these so-called A-and F-type stars, which are typically difficult to detect because they rotatefast and have pulsating atmospheres.

Due totheir extreme rotational velocities and high temperatures, A and F stars onlyjitter slightly from orbiting planets and so surveys can only pick up wobblesfrom super-massive planets and brown dwarfs in short-period orbits around thesestars.

Johnsondiscovered that ?retired? A stars, which have nearly burned all of theirhydrogen and remain stable for a short stint, have slower rotation rates andare not so hot. That makes it easier for astronomers to measure theirplanet-caused wobbles.?

For thisreason, massive stars are more likely to harbor Jupiter-sized planets than arelower-mass stars, Johnson said. And retired A-type stars are twice as likely tosupport planets compared with Sun-like stars, which Johnson attributes to thefact that bigger stars start out with more material in their disks to feedplanet building.

So thesemassive stars also could represent a treasure trove for places to spot newexoplanets, along with the M stars, Johnson said.