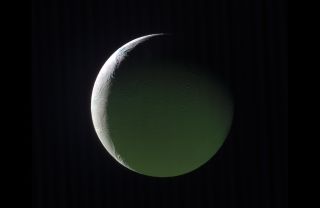 Cassini may be gone, but the spacecraft's gorgeous photos will be with us forever, as a newly released shot of the Saturn moon Enceladus shows.

In the image, the distant sun lights up a crescent of Enceladus' icy surface, while the rest of the 313-mile-wide (504 kilometers) moon's face glows dully in reflected "Saturn-shine."

Cassini took the photo with its narrow-angle camera on March 29, when the probe was about 110,000 miles (180,000 km) from Enceladus. The image scale is 0.6 miles (1 km) per pixel, NASA officials said. [Enceladus in Photos: Amazing Views of Saturn's Icy Moon]

The photo doesn't show the geysers of water ice and other material blasting into space from Enceladus' south polar region.

"The sun-Enceladus-spacecraft (or phase) angle, at 141 degrees, is too low to make the moon's famous plumes easily visible," NASA officials wrote in a photo description Monday (Sept. 25).

Cassini discovered those geysers back in 2005. Further observations by the spacecraft led mission scientists to conclude that the plume material is coming from a subsurface ocean of liquid water, and that this ocean likely even harbors a potentially life-supporting energy source.

The $3.2 billion Cassini-Huygens mission — a joint effort of NASA, the European Space Agency (ESA) and the Italian Space Agency — launched in October 1997 and arrived in orbit around Saturn on the night of June 30, 2004. (Huygens was a piggyback ESA lander that touched down on Saturn's biggest moon, Titan, in January 2005.)  [The Strangest Moons of Saturn]

NASA brought the Cassini orbiter's epic mission to an end on Sept. 15 of this year by intentionally crashing the probe, which was running out of fuel, into Saturn's thick atmosphere. This suicide plunge was designed to ensure that Cassini would never contaminate Enceladus or Titan, both of which may be capable of supporting life, with microbes from Earth.