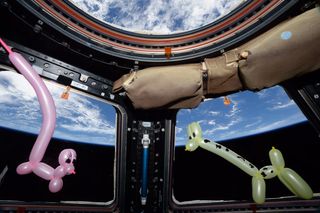 Balloon animals float around in the Cupola window on the International Space Station. NASA astronaut and Expedition 53 Cmdr. Randy Bresnik made the balloon animals to entertain his kids during family videoconferences.
(Image: © Randy Bresnik/NASA/Twitter)

Have you ever seen a giraffe floating in zero-g?

The International Space Station (ISS) is obviously no place for giraffes — they couldn't possibly fit inside a Soyuz spacecraft to get there, and they'd have a pretty hard time stumbling around the station's narrow corridors without gravity or thumbs. But one NASA astronaut has found a creative way to bring giraffes and other animals on board: balloons.

When Expedition 53 Cmdr. Randy Bresnik packed his bags for his five-month mission to the ISS, he made sure to pack a bag of special twisting balloons so he could create adorable balloon animals in orbit. He arrived at the orbiting laboratory in July without making much ado about the balloons at first. Finally, Bresnik tweeted a photo from the ISS on Monday (Sept. 18) of two adorable balloon animals floating weightlessly in the Cupola window. [Fun in Zero-G: Wild Photos of Weightlessness]

Whereas balloons on Earth need helium to stay afloat, balloons in space float weightlessly regardless of what type of gas they're filled with. Balloon artists on Earth use helium because it is lighter than the air in the atmosphere, causing it to rise. With microgravity at the ISS, however, there is no way of telling what is up or down, and balloons all float the same regardless of whether they're filled with helium or an astronaut's breath.

Clowning around and twisting tube-shaped balloons into dogs and giraffes may sound like an amusing way to spend your free time while living in space. But Bresnik didn't necessarily bring the balloons for his own enjoyment, he told Space.com in a prelaunch interview in January. Rather, Bresnik said he brought the balloons up to the ISS to entertain his kids.

"Over the summer, we were over in Russia together for a while, and they got into the long balloons that you can twist up and make into shapes of animals, like clowns do at parties for kids," Bresnik said. "I've got a set of those going up so that I can maybe make some space animals to interact with them when we're doing stuff on our family conferences." [Space Station Snapshots from the Expedition 53 Crew]

Bresnik and his wife Rebecca have two children, ages 11 and 7. Their younger child, Abigail Mae, was born during Bresnik's last trip to space, in 2009, when he flew on the space shuttle Atlantis for mission STS-129. Like other astronauts who have families back on Earth, Bresnik regularly does videoconferences with his wife and kids.

Some lucky schoolchildren may also have the opportunity to watch Bresnik make his balloon animals in space, the astronaut told Space.com. Astronauts at the ISS frequently participate in videoconferences with schools back on Earth, and those in-flight educational events air on NASA TV. Bresnik said he may entertain some of the younger students with his balloon-animal skills during these videoconferences.

So, if you're hoping to see how balloon animals are born in space, stay tuned to NASA TV! You can find a list of upcoming in-flight events on the NASA TV schedule. You can also follow Bresnik on Twitter at @AstroKomrade for more cool photos from space – and, hopefully, more balloon animals!