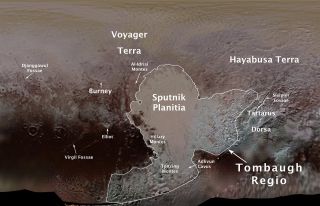 Pluto’s first official surface-feature names are marked on this map, which was compiled from images and data gathered by NASA’s New Horizons spacecraft during its flight through the Pluto system in 2015.
(Image: © NASA/JHUAPL/SwRI/Ross Beyer)

The International Astronomical Union (IAU) has officially approved 14 names for surface features on Pluto, including "Tombaugh Regio" for the dwarf planet's famous heart and "Sputnik Planitia" for the huge, nitrogen-ice plain that makes up the heart's left lobe.

These two monikers should be familiar to space fans: They were informal names bestowed by the handlers of NASA's New Horizons spacecraft, which identified the features when it flew by Pluto in July 2015. (The appellations reference Clyde Tombaugh, the American astronomer who discovered Pluto in 1930, and the first-ever artificial satellite, the Soviet Union's Sputnik craft, which reached Earth orbit in 1957.) [Destination Pluto: NASA's New Horizons Mission in Pictures]

Indeed, all 14 names were submitted for IAU approval by the New Horizons team. The scientists came up with some of those names themselves, while others were proposed by members of the public via the Our Pluto campaign, a collaboration among the mission team, the IAU and the SETI (Search for Extraterrestrial Intelligence) Institute in Mountain View, California.

You may also recognize Tenzing Montes and Hillary Montes, names given to towering water-ice mountain ranges on Pluto in honor of Tenzing Norgay and Edmund Hillary. In 1953, Norgay and Hillary became the first people to reach the summit of Earth's highest peak, Mount Everest.

Other names celebrate NASA's far-flung Voyager spacecraft and Japan's Hayabusa asteroid-sampling probe, while still others recognize underworld figures from the mythologies of various cultures. You can read the full list here.

"The approved designations honor many people and space missions who paved the way for the historic exploration of Pluto and the Kuiper Belt, the most distant worlds ever explored," New Horizons principal investigator Alan Stern, from the Southwest Research Institute in Boulder, Colorado, said in a statement.

More names for features on Pluto and its five moons will likely be submitted for approval in the future, IAU representatives said.

Stern and the IAU don't see eye to eye on everything, however. In 2006, the IAU reclassified Pluto as a "dwarf planet," reducing the number of officially recognized "true" planets in our solar system to eight. The decision still does not sit well with Stern and a number of other scientists.

Indeed, earlier this year, Stern and other New Horizons team members proposed a new "geophysical" planet definition, which would grant official planethood to Pluto and other dwarfs, as well as some moons (including Earth's).

The $700 million New Horizons mission launched in January 2006. The probe is currently streaking toward a Jan. 1, 2019, flyby of the distant object 2014 MU69, which lies about 1 billion miles (1.6 billion kilometers) beyond Pluto. This second flyby is the centerpiece of New Horizons' extended mission, which NASA approved last year.