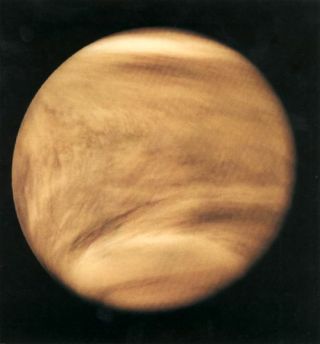 In this ultraviolet image captured in 1979 by NASA's Pioneer Venus Orbiter, the planet's light and dark stripes mark the cloud tops.
(Image: © NASA)

A proposed NASA mission could solve the mystery of how Venus got its stripes.

To the human eye, the cloud tops of Venus may look smooth and monochrome, but in ultraviolet light, dark and light streaks decorate Earth's sister planet. The cause of these stripes is unknown, and Venus' thick, blistering atmosphere (which is hot enough to melt lead) has made the world a difficult planet to study.

Now, NASA has invested money in a proposed mission that could help researchers figure out what causes the Venusian bands, according to a statement from the agency. The mission would use a very small space probe, equipped with cutting-edge technology, the statement said. [The 10 Weirdest Facts About Venus]

The CubeSat UV Experiment, or CUVE, would orbit Venus over the poles and study the planet's atmosphere in ultraviolet and visible wavelengths of light. Venus' cloud tops scatter visible light, which makes the planet look like a smooth, featureless globe. But some of the material in the clouds absorbs ultraviolet light, creating the dark stripes, according to the statement.

"The exact nature of the cloud-top absorber has not been established," Valeria Cottini, CUVE principal investigator and a researcher at the University of Maryland, said in the statement. "This is one of the unanswered questions, and it's an important one."

One hypothesis that could explain how Venus gets its stripes posits that material from
"deep within Venus' thick cloud cover" could rise into the cloud tops via convection (in which hot material in a fluid naturally rises above cold material). Winds would then disperse the material along breezy pathways, creating streaks.

The spacecraft would be a cubesat, or a miniature satellite that typically consists of single unites that are about 10 inches (25.4 centimeters) cubed. CUVE would include a miniaturized ultraviolet camera "to add contextual information and capture the contrast features," according to the statement, and a spectrometer to study the UV and visible light in detail.

CUVE could also carry a "lightweight telescope equipped with a mirror made of carbon nanotubes in an epoxy resin," officials said in the statement. "To date, no one has been able to make a mirror using this resin."

The nanotubes and epoxy would be poured into a mold, heated to harden the epoxy and then coated with a reflective material. This telescope would be lightweight and easy to reproduce, and would not require polishing, which is typically time-consuming and expensive, according to the statement.

"This is a highly focused mission — perfect for a cubesat application," Cottini said in the statement. She later added, "CUVE would complement past, current and future Venus missions and provide great science return at lower cost."