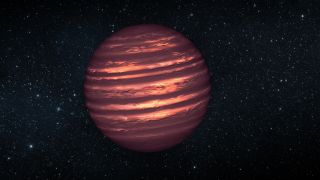 Researchers have found Neptune-like bands of clouds circling the surface of a brown dwarf, an object in between the size of a planet and a star.
(Image: © NASA/JPL-Caltech)

For the first time, scientists have seen bands of clouds drifting across the skies of failed stars known as brown dwarfs.

In the past 25 years or so, astronomers have confirmed the existence of more than 3,500 exoplanets, or planets outside Earth's solar system. Scientists have also detected numerous so-called brown dwarfs, objects that are about 13 to 90 times the mass of Jupiter — too big to be planets, but not quite big enough to be true stars. Researchers sometimes call brown dwarfs "failed stars," because nuclear fusion never ignited in their cores. [Brown Dwarf Photos: Failed Stars and Stellar Misfits Revealed]

Scientists have previously detected evidence of clouds on exoplanets and brown dwarfs. However, this is the first time that cloud bands have been spotted on one of those objects, study team members said.

Previous work suggested that brown dwarfs have much in common with giant exoplanets in terms of size, temperature and composition. As such, study lead author Daniel Apai, who is an astrophysicist and planetary scientist at the University of Arizona in Tucson, and his colleagues investigated brown dwarfs to learn more about giant exoplanets.

The fact that many brown dwarfs are located away from stars makes them easier for astronomers to examine than many giant exoplanets, Apai told Space.com. In contrast, giant exoplanets are typically obscured partly by the brightness of their stars, he added.

In the past five years, a number of studies have found that the infrared light from many brown dwarfs could vary in unusual ways over time. However, until now, there was no convincing explanation for this phenomenon.

To help solve this mystery, Apai and his colleagues analyzed data from NASA's Spitzer Space Telescope. They focused on the way the infrared brightness of three brown dwarfs changed over time as the objects completed a total of 192 rotations over the course of 1.5 years.

The observations of these brown dwarfs helped "derive crude maps for how their clouds are distributed and how they evolve," Apai said.

The scientists discovered rotating bands of clouds in the atmospheres of these brown dwarfs that are broadly similar to bands of clouds seen on Neptune. As the bands on the brown dwarfs rotated, slight differences in the speeds of the bands generated a pattern of beats in their infrared light, explaining the mystery regarding their shifting brightness, Apai said.

"This is the first time that the presence of bands is shown in brown dwarfs," Apai said. He added that scientists have not yet reported any evidence for bands of clouds in exoplanets.

In the future, the next major NASA space telescope, the James Webb Space Telescope, will help researchers analyze brown dwarfs and exoplanets in even greater detail, Apai said."The same technique we used for brown dwarfs now could be used to build crude maps of Earth-like planets, once we have the right telescopes, and NASA is exploring some designs that could do that in the future," he added.

The scientists detailed their findings in the Aug. 18 issue of the journal Science.