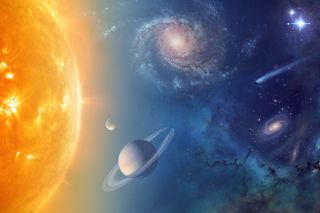 Six astrophysics programs selected for further study by NASA have science goals across the universe, ranging from exoplanets to galaxies.

This round of choices for NASA's Explorers Program, announced Aug. 9, includes three Explorer missions ($250 million each) and three missions of opportunity ($70 million each).

Each team has the chance to do a concept study. Scientific evaluations will be performed on each study, then NASA will select one Explorer mission and one mission of opportunity to fund in 2019. The expected launch dates would fall in 2022. [The Biggest Space Missions to Watch in 2017]

The three mission proposals (each receiving $2 million for the concept study), according to a NASA statement, are:

The three missions of opportunity (each receiving $500,000 for the concept study) are:

Explorers is NASA's longest-running program. Its first mission was Explorer 1 in 1958, which also was the first U.S. satellite. Explorer 1 discovered the Van Allen radiation belts surrounding Earth. More than 90 missions have run under the program, including the Uhuru and Cosmic Background Explorer (COBE) missions that led to Nobel Prizes for their investigators.

"The Explorers Program brings out some of the most creative ideas for missions to help unravel the mysteries of the universe," Thomas Zurbuchen, associate administrator of NASA's science mission directorate, said in the statement. "The program has resulted in great missions that have returned transformational science, and these selections promise to continue that tradition."