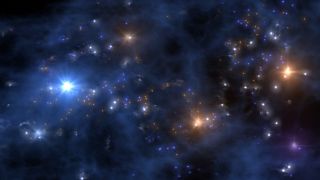 When astronomers gaze at the center of the Milky Way, some 27,000 light years from our Solar System, a jumble of gas and dust obscures their view. Bursting through the mess, however, is a radio signal, immensely powerful, and keenly focused, unlike anything else in our galaxy. Astronomers are now very certain that the signal emanates from Sagittarius A*, an immense black hole 44 million kilometers in diameter (a little less than the closest distance from the Sun to Mercury) with a mass of four million Suns. Pretty much everything in our galaxy revolves around this gargantuan object.

But more amazing than Sagittarius A* itself is the story of how it came to be. What follows consists of learned speculation, inferences, and hypotheticals based on astronomical observations and cosmological theory. None of it has actually been seen... yet.

Long ago, perhaps just a hundred million years after the Big Bang, the first stars formed. Born within the thick, gassy soup of the early Universe, these stars fed on the pristine hydrogen and helium from the Big Bang itself. Because there was so much elemental fuel, they gorged themselves into behemoths, growing hundreds of times more massive than our Sun, and far larger than any even the largest stars that exist today. They burned bright, but died young, living as few as two million years. For comparison, stars like our Sun persist for billions of years

But though deceased, these first stars were not finished affecting the Universe. In fact, they may litter the cosmos today, albeit in an unrecognizable form.

"These enormous stars are... thought to have left behind enormous black holes when they died..." Lehman College astrophysicist Matt O'Dowd explained on a recent episode of PBS Space Time. "Clusters of giant stars become clusters of giant black holes, which, in turn, would merge into monsters of thousands or tens of thousands of solar masses. Now, these were probably the seeds of the so-called supermassive black holes, with millions to billions of times the mass of the sun, that we find lurking in the centers of galaxies."

So Sagittarius A*, essentially the heart of our galaxy, may be the blackened husk of some of the first stars in the Universe. The other two trillion galaxies in the Universe may also have formed around their remains.

There is a very good chance that this tale is true, but that is not enough. Actually seeing is infinitely better than simply believing. Scientists know this, which is why astronomers are busy building the telescopes of the future that could allow us to test cosmologists' theories.

The launch of the James Webb Space Telescope is now just a little over a year away. At least one group of astronomers is hopeful that its gaze will be far-reaching enough to directly detect the Universe's first stars. Doing so could bring the story of Sagittarius A* firmly into the realm of non-fiction, or it could tell us something completely unexpected. Whatever we end up seeing, it's sure to be awe-inspiring.