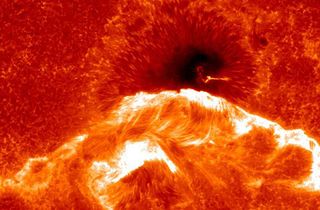 A new moviefrom the Japanese Hinode spacecraft is one of the most detailed glimpses of asolar flare ever made and has helped scientists see what's behind the colossaleruption.

The strikingvideo, released this week, shows a major flare that lifted offthe Sun Dec. 13, 2006. The flare erupted from a sunspot catalogued asnumber 930.

Sunspotsare cooler regions of the Sun's surface where magnetic energy caps thesuperheated material below. Sometimes the cap unleashes a flare, similar tosoda exploding from a shaken can.

Hinode canspot solar details as small as 90 miles wide, even though it's 93 million milesfrom the Sun.

Other datagathered by the spacecraft gave astronomers an unprecedented view of themagnetic underpinnings of the flare.

In themaelstrom above a sunspot, lines of magnetic force are twisted and stretcheduntil the tension reaches a certain point--and then the whole thing explodes. Arubber band provides a good analogy, Davis suggested in a NASA statement. Holdone end in each hand, stretch it and twist until the band snaps.

Magneticfields behave a lot like rubber bands, and "Hinode was able to see thetwisting and stretching that preceded the Dec. 13th solar flare," Davis said.

The Dec. 13flare was an X-3. All X-flares are major, with higher numbers indicated greaterreleases of energy. This one created a coronal mass ejection (CME), or giantexpanding bubble of charged particles. The CME interacted with Earth's magneticfield to produce Northern Lights asfar south as Arizona.

Hinode ispoised to help researchers unravel remaining mysteries about how solar flaresand storms work, but the Sun isin a low period of activity in its 11-year cycle.

"Thekind of data we're getting from Hinode is just what we need to sort out howflares work," Davis said. "All we need now is some moreexplosions."

Someforecasters expect the next peak in the solar cycle, due to begin ramping up ina couple years, to be one of the strongest on record. Enhanced activity meanssatellites and even power grids on Earth are at risk of electrical malfunction.Hinode is joined by NASA's new 3-D STEREO spacecraft to provide better forecastingability than during past cycles.