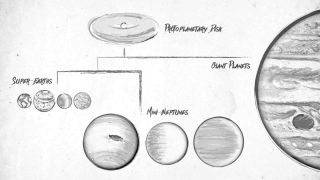 This sketch illustrates a family tree of exoplanets. Planets are born out of swirling disks of gas and dust called protoplanetary disks. The disks give rise to giant planets like Jupiter as well as smaller planets mostly between the sizes of Earth and Neptune. Researchers using data from the W. M. Keck Observatory and NASA's Kepler mission discovered that the smaller planets can be cleanly divided into two size groups: the rocky Earth-like planets and super-Earths, and the gaseous mini-Neptunes.
(Image: © NASA/Kepler/Caltech (T. Pyle))

Scientists have reorganized the exoplanetary tree of life into two distinct branches. Most exoplanets discovered so far are close in size to Earth or either Neptune, according to a new study led by the California Institute of Technology. But astronomers are puzzled as to why there is a gap between these two planetary sizes.

The work includes data from NASA’s Kepler space telescope, which searches for Earth-like worlds in the habitable zones of their stars, and the W. M. Keck Observatory, which detects planets using the High Resolution Echelle Spectrometer (HIRES) on the Keck I telescope. The researchers attempted to classify these planets similarly to how biologists classify animal species.

"This is a major new division in the family tree of planets, analogous to discovering that mammals and lizards are distinct branches on the tree of life," said Andrew Howard, professor of astronomy at Caltech and principal investigator of the new research, in a statement.

"In the solar system, there are no planets with sizes between Earth and Neptune," added Erik Petigura, co-author of the study and a Hubble postdoctoral fellow at Caltech. "One of the great surprises from Kepler is that nearly every star has at least one planet larger than Earth but smaller than Neptune. We'd really like to know what these mysterious planets are like and why we don't have them in our own solar system."

RELATED: Earth May Once Have Been a Donut-Shaped Mass of Vaporized Rock Called a Synestia

A study based on the research will be published in The Astronomical Journal and a preprint version is available now in preprint version on Arxiv. The study itself is led by B.J. Fulton, a graduate student in Howard's group who works at both Caltech and the Institute of Astronomy at the University of Hawaii.

"Astronomers like to put things in buckets," Fulton remarked. "In this case, we have found two very distinct buckets for the majority of the Kepler planets."

The first planet around a sun-like star was discovered in the mid-1990s. Today, there are nearly 3,500 confirmed exoplanets, with thousands more yet to be confirmed. Most of these were found by Kepler, which began its mission by staring at a fixed spot in the Cygnus constellation. Kepler monitored the stars for telltale dips of light as planets passed in front of the stars.

After the mission was no longer able to point consistently due to failing gyroscopes, Kepler began a new mission in 2013 called "K2," where it rotates its view several times a year. It still is discovering exoplanets, but at a lower rate than before.

The Kepler catalog mostly includes planets that are very close in to their stars. Previously, the planets discovered by Kepler were known to be between the size of Earth and Neptune – but no distinct groups were known until data from the Keck telescope was used.

"Before, sorting the planets by size was like trying to sort grains of sand with your naked eye," said Fulton. "Getting the spectra from Keck is like going out and grabbing a magnifying glass. We could see details that we couldn't before."

The information from Keck yielded the sizes of these planets with four times more precision than what was available before. The new distribution revealed a gap between rocky Earths and mini-Neptunes. While scientists are still investigating what causes the gap in planetary sizes, they have two possible explanations.

One explanation could be that many planets are naturally Earth-sized and remain at their original size, while other ones — for reasons that are still poorly understood — acquire a lot of gassy mas.

Alternatively, the gap may exist because planets that are between super-Earth and mini-Neptune size see their gas burned off when they are exposed to radiation from their parent star.

"A planet would have to get lucky to land in the gap, and then if it did, it probably wouldn't stay there," said Howard. "It's unlikely for a planet to have just the right amount of gas to land in the gap. And those planets that do have enough gas can have their thin atmospheres blown off. Both scenarios likely carve out the gap in planet sizes that we observe."

The researchers plan more study to look at the heavy elements in each planet to learn more about the worlds' composition, which would in turn refine the predictions about how these planets are formed.

"We are currently working to understand what these mini-Neptunes are made of, which should help explain why these planets form so easily around other stars and why they didn't form around the sun," said Petigura.

In related news, on Monday (June 19) NASA released a new catalog of exoplanets from the Kepler telescope, based on data from the first four years of Kepler's mission before K2. The data includes 219 exoplanet candidates. Of these candidates, 10 are believed to be Earth-sized and in the habitable zones of their parent stars.