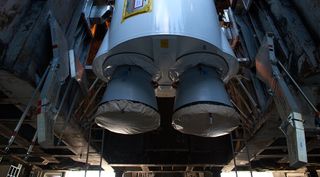 The RD-180 engine in the first stage of the Atlas 5. An amendment to a Senate sanctions bill will allow continued imports of Russian engines for civil and commercial launches.
(Image: © ULA)

WASHINGTON — Senators overwhelmingly passed an amendment to an Iran-Russia sanctions bill June 15 to fix language some argued could have prevented NASA and others from launching missions on rockets that use Russian engines.

In discussion on the Senate floor June 15, several senators said a provision of S. 722, a bill that imposes sanctions on both Iran and Russia for their destabilizing actions in the Middle East and elsewhere, would have prevented the importation of Russian rocket engines for use on civil and commercial launches.

That provision requires the president to impose sanctions on organizations that work with the defense and intelligence sectors of the Russian government. Those sanctions include a ban on procuring goods and services from those organizations.

The senators, as well as industry sources, said that language would have the effect of banning imports of engines from NPO Energomash, a Russian company that supplies the RD-180 engine used on United Launch Alliance's Atlas 5 and the RD-181 engine used on Orbital ATK's Antares. Energomash also provides engines for Russian vehicles, including those used for military launches.

The original bill included an exception that would have allowed continued import of Russian engines for U.S. national security launches under terms of previous defense authorization bills. However, senators argued that the bill would have blocked import of those engines for civil and commercial launches, with consequences for NASA and others.

"Without passage of Amendment #250, we lose a tremendous portion of our access to space," said Sen. Cory Gardner (R-Colo.) during debate on the Senate floor. Gardner was referring to an amendment he introduced that established an exemption to the sanctions for Russian engines and other hardware used for civil or commercial launches.

"Without this bipartisan amendment, multiple missions on the books today, multiple missions that are already planned today, will be delayed or even cancelled, and would be subjecting the U.S. taxpayers to significant cost increases," he said. He cited a number of examples, from launches of weather satellites to commercial cargo and crew missions to the International Space Station.

Among the amendment's cosponsors was Sen. Bill Nelson (D-Fla.) "It corrects what was not intended, but unless corrected, would be disastrous, not only for NASA, but for all of our burgeoning commercial space industry," he said.

Sen. Mark Warner (D-Va.) said he supported ongoing efforts to end reliance on Russian engines, but argued against the hard cutoff that the bill would effectively create. "I think it's important, over a very short time, that we get off of purchasing Russian rockets," he said. "But we need that transition period."

Gardner said NASA had discussed the bill's consequences with his office and supported his amendment. "NASA contacted my office yesterday and said of Amendment #250, 'We believe this provides us the flexibility to maintain our commitments to our national space program,'" he said.

NASA spokesman Bob Jacobs said the agency could not discuss the details of its discussions with Gardner or other senators, but was grateful for their efforts to pass the amendment. "We appreciate the strong, bipartisan support we received as part of the amendment that ensures the continued safe and peaceful exploration of space for current and future missions," he said.

Gardner and other senators argued that they were correcting an unintended consequence of the bill, with Nelson calling the amendment "technical" in nature. However, Sen. John McCain (R-Ariz.), a strong critic in recent years regarding reliance on Russian engines, spoke out against the amendment.

"Have no doubt about what this amendment is, my dear colleagues and friends: it is a giveaway to the Russian military industrial complex," he said, claiming it was backed by a "collection of lawmakers, executives and lobbyists" who support extending purchases of Russian engines.

McCain argued that NASA should follow in the footsteps of the U.S. Air Force, which is funding development of new rocket engines to end national security dependence on the RD-180. "NASA needs to the same," he said, a sentence he repeated twice for emphasis.

He admitted, though, that the amendment was likely to pass, and he was correct: senators voted 94–6 to approve the amendment, before passing the entire bill 98–2. The bill now goes to the House.

One of the companies affected by the amendment, Orbital ATK, welcomed its passage. "Orbital ATK is pleased with the continued bipartisan support for our nation's space programs and happy to continue to support our NASA customer," company spokesperson Sean Wilson said.