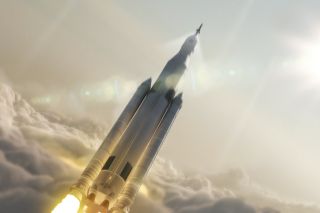 Artist's impression of NASA's Space Launch System during takeoff, with the Orion spacecraft riding on top. A test flight of SLS, which will send Orion around the moon and back, is expected to take place in 2019.
(Image: © NASA)

As NASA considers sending astronauts deeper into the solar system, one major barrier will be cost. Launching cargo from Earth is expensive, which is why the Apollo program that brought crews to the moon in the 1960s and 1970s cost the equivalent of $109 billion in 2010 dollars.

To make moon flights cheaper, a new paper proposes using an electrically powered lunar space tug that would operate between Earth and the moon, carrying logistics modules with supplies for a lunar space station. The research was recently published in Acta Astronautica.

This is a different vision from NASA's present plans for lunar exploration. The space agency is hoping to resume missions to the moon in the near future using its new Space Launch System, a rocket that is capable of bringing humans to the moon or other places outside of Earth orbit. (The rocket hasn't been tested yet, but is expected to send an uncrewed Orion spacecraft around the moon in 2019.) In later decades, NASA tentatively proposes developing a Deep Space Gateway — a space station around the moon that could serve as a base for missions to the moon, Mars, or other distant destinations.

A conceptual design for the tug is being studied by Italy's Polytechnic University of Turin and Thales Alenia, an aerospace company that built several modules for the International Space Station, such as the Cupola that is used for Earth observations, or the Columbus science laboratory. The work is led by mechanical and aerospace engineering Ph.D. student Martina Mammarella.

"When I started my Ph.D. two years ago, I was interested in the development of the future space station in the cislunar environment," Mammarella told Seeker in an e-mail, referring to the environment around the moon. "Then, analyzing the mission scenario and all the elements involved in it, we came out with the idea to study in deep the concept of a sustainable transportation system, equipped with electric propulsion."

The space tug would fly for several missions between our planet and the moon, serving as a reusable transportation system. To keep it going, fuel will be needed from a future fuel depot in low Earth orbit, and maintenance would be performed by astronauts at the moon and (if it still exists) the International Space Station, which at the moment is expected to be retired in 2024.

Mammarella said the tug's big advantage comes from using electric propulsion, specifically from a type known as Hall Effect Thrusters. These kinds of thrusters transform neutral atoms into propellant using electric and magnetic fields. The propellant is made up of charged atoms that are called ions. The ions are then boosted to give the spacecraft thrust. Examples of electrically powered spacecraft currently in use include NASA's Dawn spacecraft (which explored Ceres and Vesta) and Japan's Hayabusa 2 (which is on its way to asteroid 1999 JU3).

RELATED: Hibernation for Deep Space Exploration Could Happen Sooner Than You Imagined

Compared with traditional chemical propulsion, Mammarella said, the Lunar Space Tug's electric propulsion would save fuel and also have fewer energy limitations. The tradeoff is that this kind of propulsion generally takes longer to bring spacecraft from place to place, as its thrust is low. Mammarella pointed out there is no particular hurry to move the cargo since the spacecraft is uncrewed, meaning there is no urgency in terms of the consumables humans need, such as oxygen or water.

SLS-Orion, by contrast, "adopts chemical propulsion and the development cost of both the system is very high, mainly because the launch vehicle," Mammaralla said. "On the other hand, the LST is able to transfer the same habitat module and it is designed considering the adoption and support of existing ground and launch infrastructures. It can be launched using the actual launchers available, reducing the development cost for the new concept. It means transferring an habitat module from Earth to the cislunar station should cost less, even if the transfer duration is much longer."

The researchers plan a second phase of the project to improve the performance of the space tug, mainly by reducing the transfer time and the fuel performance. The team also plans to do an analysis of the best transfer trajectories, and the best ways for the tug to reach the station.

"Further analyses will consider in detail also fuel and maintenance operations," Mammaralla said, "and all the technical implication of adopting electric propulsion."