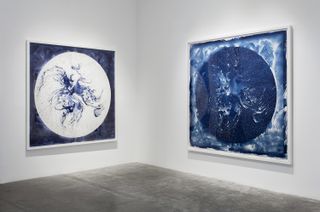 The image on the right is a cyanotype of the painting on the left. Cyanotyping creates a negative image of the original, similar to how photographs are made from film.
(Image: © Courtesy of Lia Halloran/Luis De Jesus Los Angeles)

Visual artist Lia Halloran's new exhibit, "Your Body is a Space That Sees Us," was inspired by women astronomers from throughout history. This image shows an original painting by Halloran of a cosmic nebula, based on a photograph taken by the astronomer Williamina Fleming, who helped create the modern classification system for stars.

The Universe on Display

The works in the new exhibit are a combination of paintings and pieces created with a process called cyanotyping. Halloran starts by painting scenes from glass plate images of cosmic objects, taken from the Harvard College Observatory's Astronomical Photographic Plate Collection. The images selected by Halloran were taken by a group of women astronomers known as the "Harvard Computers," in the late 1800s.

The paintings, done on semi-transparent paper, are pressed against water color paper, and painted over with a light-sensitive light. When exposed to sunlight, the paint creates a negative image of the original painting.

This piece by Halloran is based on stellar spectra (which reveal the chemical composition of a star) originally captured by astronomer Annie Jump Cannon, who created the modern stellar classification system. Halloran created these works from photographic plates captured by Cannon and her colleagues at Harvard.

This work by Halloran shows a globular cluster (a dense collection of stars) imaged by astronomer Helen Sawyer.

The cyanotype print of the painting depicting a globular cluster.

The cyanotype print of the painting depicting the Small Magellanic Cloud.

The largest piece in Halloran's exhibit depicts a swirling galaxy.

Halloran also framed the paintings in circular frames, which may remind viewers of looking through a telescope, or into a framed mirror. Along with the title of the exhibit, this feature of the works is meant to draw attention back to the viewer.

The original paintings are done on white paper with blue ink; the cynaotyped images have an inverted color scheme.