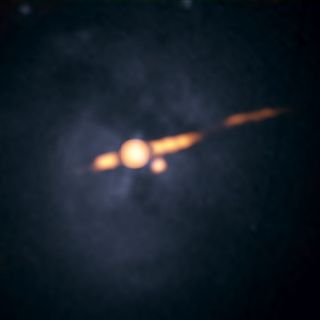 A radio image of the galaxy Cygnus A captured by the Very Large Array (VLA) in 2015 (orange), overlaid on a photo by NASA's Hubble Space Telescope. The orange dot below and to the right of the larger orange circle at the galaxy's center is the suspected second supermassive black hole.
(Image: © Perley, et al., NRAO/AUI/NSF, NASA)

Two monster black holes are apparently on a collision course near the heart of a nearby galaxy, a new study reports.

Astronomers have spotted an extremely bright object located about 1,500 light-years from the supermassive black hole known to occupy the heart of Cygnus A, an oft-studied galaxy that lies about 800 million light-years from Earth.

"We think we've found a second supermassive black hole in this galaxy, indicating that it [the galaxy] has merged with another galaxy in the astronomically recent past," study co-author Chris Carilli, of the National Radio Astronomy Observatory (NRAO) in New Mexico, said in a statement. [Images: Black Holes of the Universe]

"These two would be one of the closest pairs of supermassive black holes ever discovered, likely themselves to merge in the future," Carilli added.

The researchers studied Cygnus A in 2015 and 2016 using the Very Large Array (VLA), a system of radio telescopes in New Mexico. These observations revealed the mysterious bright object, which had not appeared in earlier VLA images of Cygnus A from the 1980s and 1990s.

The completion of a VLA upgrade in 2012 motivated the new imaging campaign, study team members said.

"To our surprise, we found a prominent new feature near the galaxy's nucleus that did not appear in any previous published images. This new feature is bright enough that we definitely would have seen it in the earlier images if nothing had changed," co-author Rick Perley, also of the NRAO, said in the same statement. "That means it must have turned on sometime between 1996 and now."

Additional observations made in 2016 by the radio telescopes of the Very Long Baseline Array, which is also located in New Mexico, detected the object as well.

Infrared images captured by NASA's Hubble Space Telescope and Hawaii's Keck Observatory between 1994 and 2002 show a faint object in the same spot within Cygnus A. This mysterious body had originally been interpreted as a clump of stars, but the recent and dramatic brightening is forcing a rethink, study team members said.

There are only two viable possibilities that could explain the new observations, the researchers added: The object is either a supernova or a supermassive black hole in outburst mode.

The team favors the black-hole hypothesis, because no known type of supernova could stay so bright for so long, the researchers said. The second supermassive black hole probably became so active after stumbling onto a lot of material to gobble up — perhaps a star that strayed too close, or gas stirred up by the galaxy merger, the researchers said.

"Further observations will help us resolve some of these questions," said study lead author Daniel Perley, of the Astrophysics Research Institute of Liverpool John Moores University in England (and Rick Perley's son). "In addition, if this is a secondary black hole, we may be able to find others in similar galaxies."