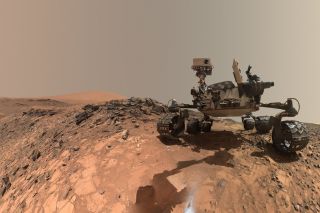 The landscape of Mars is predominantly shaped by winds these days, as its volcanoes appear dormant and the atmosphere is too thin to let water easily flow on the surface. But what sort of a risk would these winds pose to missions on the Red Planet if discarded hardware happens to be near a lander?

It's common for Mars missions — such as the 2012 Curiosity rover and the upcoming Mars 2020 rover — to have separate entry, descent, and landing (EDL) systems from the surface hardware. A rover that makes it through the atmosphere and lands safely on the surface would have no further need of a heat shield or parachute or similar items to accomplish its mission, so such features are typically ditched.

Just before the Curiosity rover landed on Mars in 2012, for example, it jettisoned its parachute and its descent stage and used a "sky crane" to lower itself to the surface. Then the connecting cord was cut and the descent stage flew far away from Curiosity. It was designed to impact at least 150 meters away, but managed to make it several times farther, a total of roughly 650 meters.

But a new paper appearing in the journal Acta Astronautica says that may not be far enough, especially for sample return missions.

"Currently available landing systems, using heat shield and parachutes, might be problematic because jettisoned hardware from these landers normally land within a few hundred meters of the lander," said lead author Mark Paton, a planetary scientist at the Finnish Meterological Institute, in an e-mail to Seeker.

"I would imagine a sample return mission would not jettison its parachute in close vicinity of the target sample or the cached sample," he continued. "The parachute might cover the sample, making its retrieval a problem. Landers using large parachutes or other large devices probably pose the greatest risk as these could be easily blown onto equipment on the surface, damaging or covering it."

"It was an important step as I was able to check if the parachute or other devices would collide with the lander after separation," he said. "It also enabled me to understand the powered descent procedure to properly calculate the propellant requirements."

Next, Paton built a simple trajectory model outside of Orbiter and ran it thousands of times for each landing system. This allowed him to map out various wind speeds and directions that could cause jettisoned spacecraft hardware to impact a crewed Mars base. He calculated probability using a probability density function to represent the distribution of wind speeds on Mars.

Paton pointed out that since the Phoenix mission of 2008, Martian landers have been able to move sideways to get away from the descending parachute, so it's very possible that future landing missions could extend that capability to move at least a kilometer horizontally before landing.

"For new landing systems, a detailed trade-off analysis would be required to determine the best way to mitigate this problem," Paton said. "To be sure that the wind is blowing away from any landed assets, the winds in the lower few kilometers of the atmosphere would ideally need to be measured close to the time of the lander’s expected arrival."

His paper noted that better characterization of Martian winds is needed to calculate impact probabilities. While high-resolution atmospheric models provide a statistical sense of the winds, he said better accuracy would come from an instrument on Mars that could "measure the winds aloft continuously over a long time period."

Future human missions to Mars would also have to contend with the debris problem. One possible method is to dispense with parachutes altogether and use a "fully propulsive" method to land on Mars, similarly to how the Apollo astronauts landed on the moon in the 1960s and 1970s.

"This fully propulsive option has been studied for Mars by NASA and others," Paton noted. "It has some significant benefits as the crew probably would experience very gentle g-levels. This would be beneficial if the crew are required to get to work, setting up the base, soon after they have landed."

But this type of system in Mars' atmosphere would either require a large amount of propellant, or a very efficient engine — more efficient than those that already exist, Paton said. To get around this, propellant could be mined from the asteroid belt and delivered to Martian orbit as propellant depots, at which visiting spacecraft could refuel before descending to the surface.