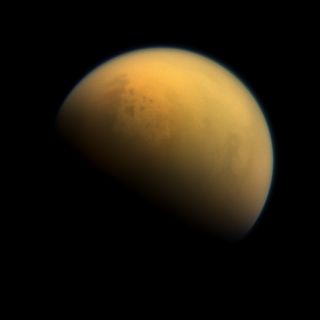 Electrified sands on Saturn's largest moon, Titan, may stick together due to static cling, potentially meaning that sand castles there would last for weeks, a new study finds.

Titan is bigger than the planet Mercury, making it the largest of the more than 60 known moons orbiting Saturn. In certain ways, Titan is reminiscent of Earth; for example, rivers, lakes and oceans cover Titan's surface, though they are made of methane and ethane instead of water.

"At first glance, if you look at images from NASA's Cassini spacecraft, Titan looks very Earth-like, with dunes, lakes, oceans, mountains and potentially volcanoes, and it has a dense, nitrogen-rich atmosphere like Earth's," said study lead author Joshua Méndez, a granular dynamicist at the Georgia Institute of Technology in Atlanta. "But once you start looking at the details, you realize that it is an alien and exciting world." [Amazing Photos: Titan, Saturn's Largest Moon]

Titan is covered with dunes and plains made of sand consisting of a range of organic molecules. Méndez speculated that the moon's sand might readily become electrically charged, making its behavior significantly different from that of Earth sand.

Méndez's specialty is electrified particles. He investigates phenomena such as volcanic lightning, which is powered by electrically charged volcanic ash particles, and studies "powders in the pharmaceutical industry, which can clump together or stick to the walls of pipes because of their electric charge," he said.

"It turns out that sand grains on Titan are not so different from pharmaceutical particles," Méndez told Space.com. "So I wanted to see how such particles might act on Titan."

Sand grains and other particles can build up electric charge through the "triboelectric effect," the same effect behind everyday static electricity. When two different materials repeatedly collide with or rub against one another, the surface of one material can steal electrons from the surface of the other, accumulating charge.

The strength of Earth's gravitational pull typically overwhelms any effect that triboelectricity might have on shaping the planet's dunes, Méndez said. However, Titan's surface gravity is more than seven times weaker than Earth's, meaning that triboelectricity might play a more conspicuous role on that moon, he said. In addition, while sand grains on Earth are often made of silicate minerals, the organic sand grains of Titan are typically fluffier, and this lighter nature could make them easier to push around, Méndez said.

Moreover, the atmospheric pressure on Titan is greater than that on Earth, while its air is dry and cold, and its sands are typically made of electrically insulating materials. All these factors should help sand on Titan hold onto electric charge longer than on Earth, the researchers said. [Huygens Probe's Titan Landing Revisited by NASA (Video)]

The researchers explored how windblown sand might behave on Titan by experimenting with particles made with naphthalene and biphenyl, two mildly toxic organic compounds that previous research suggested might exist on Titan's surface. The scientists rotated a small tube holding these particles for 20 minutes in a dry, pure-nitrogen environment. (Titan's atmosphere is about 98 percent nitrogen.)

Results showed that all the particles accumulated electric charge, with about 2 percent to 5 percent sticking onto the tumbler's walls. "When we did the same experiment with sand and volcanic ash using Earth-like conditions, all of it came out. Nothing stuck," Méndez said in a statement.

All in all, "if you grabbed piles of grains and built a sand castle on Titan, it would perhaps stay together for weeks due to their electrostatic properties," study co-author Josef Dufek, at the Georgia Institute of Technology, said in a statement. Whereas sand castles on Earth typically need water to stick together, these structures on Titan could rely somewhat on electric charge, which the sand there could retain for up to months, the researchers said.

"Our findings highlight that caution is needed when applying models from Earth to other environments," Méndez said. "We have to rethink our assumptions with a world as different as Titan."

These findings might help explain an odd phenomenon, the researchers said. Prevailing winds on Titan blow from east to west across the moon's surface, but sandy dunes nearly 300 feet (90 meters) tall seem to form in the opposite direction. Titan's sand grains may be "so sticky and cohesive that only heavy winds can move them," Méndez said in a statement. "The prevailing winds aren't strong enough to shape the dunes."

Méndez said he did not think this sticky sand would pose insurmountable challenges for missions dispatched to Titan's surface. "When missions landed on Mars and the moon, they had to deal with dust sticking to everything, too," Méndez said. "Maybe whatever robots we send to Titan will have to be able to clean themselves."

In the future, the researchers would like to carry out larger-scale experiments to see if electricity might indeed help create big structures on Titan, Méndez said.

The scientists detailed their findings online March 27 in the journal Nature Geoscience.