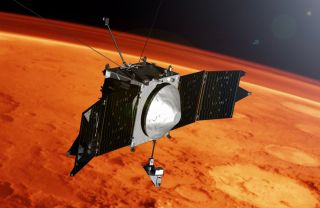 Mars has metal in its air.

"MAVEN has made the first direct detection of the permanent presence of metal ions in the ionosphere of a planet other than Earth," study lead author Joseph Grebowsky, of NASA's Goddard Space Flight Center in Greenbelt, Maryland, said in a statement. [Photos: NASA's MAVEN Mission to Mars]

"Because metallic ions have long lifetimes and are transported far from their region of origin by neutral winds and electric fields, they can be used to infer motion in the ionosphere, similar to the way we use a lofted leaf to reveal which way the wind is blowing," Grebowsky added.

The metal comes from particles of interplanetary dust, which rain down on the Martian atmosphere continuously and burn up, study team members said. Charged molecules and atoms high up in the Red Planet's air rip electrons from the metal atoms, turning them into ions.

These dust particles are common throughout the solar system, so all planets and moons with substantial atmospheres probably have metal ions in their air, team members said. Indeed, radio signals from NASA spacecraft occasionally get blocked when they go through planetary atmospheres — interference that's thought to be caused by ionosphere electrons, some of which may have been torn from metal ions.

Still, the new results from MAVEN mark the first time that metallic ions have been confirmed to persist in the air of an alien world. (The probe previously identified metal in Mars' air in late 2014, Grebowsky said, but that detection was associated with a dramatic one-off event — the close approach of Comet Siding Spring. The new study extends the detection record to two years, strongly suggesting that metal ions are a permanent feature of the Martian atmosphere.)

These ions behave differently from the metal swirling in Earth's air, primarily because our planet has a strong global magnetic field and Mars does not. This field shapes Earth's metal ions into layers — a phenomenon observed at Mars only in certain spots, near the Red Planet's pockets of local, "fossilized" magnetic fields, Grebowsky said.

"Observing metal ions on another planet gives us something to compare and contrast with Earth to understand the ionosphere and atmospheric chemistry better," Grebowsky said.

The new study was published Monday (April 10) in the journal Geophysical Research Letters.

MAVEN arrived at Mars in September 2014. The orbiter's observations are helping scientists better understand how and when the Red Planet lost most of its atmosphere to space, transitioning from a relatively warm and wet world long ago to the cold and dry place it is today.