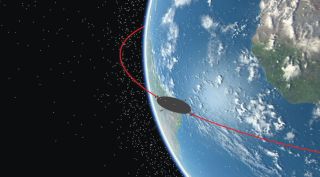 As companies prepare to launch constellations of small satellites for Earth observation and global broadband services, Kaplan said companies and government agencies should begin working together to clean up heavily traveled orbits between 600 and 1,200 kilometers. [7 Wild Ideas to Clean Up Space Junk]

"Several thousand new satellites are planned for launch into low Earth orbit in the next few years," Kaplan said. "That will make the debris problem much worse. At some point, no one knows when, there will be so many collisions that we won't be able to operate safely in low Earth orbit anymore."

To keep debris from ruining the most desirable orbits, Launchspace Technologies proposes sending Debris Collection Units with replaceable, mesh Debris Impact Pads into orbits shaped and synchronized to clean up debris as it crosses the equator, while steering clear of satellites and debris large enough to track. The plan calls for servicing vehicles, also in equatorial orbit, to move Debris Collection Units from one location to another. Eventually, the proposed constellation could include an Orbital Servicing and Remanufacturing Facility where old Debris Impact Pads could be reprocessed to create new pads or other products.

Kaplan estimates the entire debris cleanup system would cost "tens of billions of dollars," adding that the cost of doing nothing and losing access to key orbits "is in the trillions."

To begin the cleanup process, Launchspace Technologies proposes establishing a public-private partnership to fund demonstration flights of Debris Collection Units equipped with space situational awareness sensors. From their vantage point in equatorial orbit, the sensors would be able to detect and track satellites and debris better than ground-based instruments. Government agencies that support the project could use data collected by the sensors to bolster national security space activities and manage space traffic, Kaplan said.

Launchspace Technologies is working with Robert Walker, executive chairman of the Washington lobbying firm Wexler & Walker Public Policy Associates and former chairman of the House Science Committee, to promote the plan. Walker said he is making sure policymakers inside the government and in the broader space community understand the proposal.

"I think it has a great potential of being a public private partnership of the type the Trump administration is looking for," Walker told SpaceNews. "It solves a real problem in space. Both the companies and military agencies that fly space assets have interest in trying to clean up as much debris as possible in the orbits they use."

"If there is so much debris you need protection for satellites, an operator could hire us to selectively take out debris around his constellation," Kaplan said. "Other operators would say, 'How can I afford not to do the same thing.'"

In the past, most debris remediation plans focused on eliminating large objects, including defunct satellites and spent upper stages. Those objects do not pose a serious threat to existing satellites because they can be tracked an avoided, said Kaplan, who began studying orbital debris retrieval in the 1970s as an aerospace engineering professor at Pennsylvania State University.

"The near-Earth zone is large enough that there has been only one known incident in which two satellites collided in the last 60 years," Kaplan said. "However, there have been thousands of recorded small debris hits on satellites."

"The population growth of small debris is unstable and will be the cause of orbital gridlock," Kaplan said, referring to the problem NASA scientist Donald Kessler highlighted in a 1978 paper. Each on-orbit collision produces debris that increases the likelihood of additional collisions. The eventual cascade would produce dangerous clouds of debris.

"By continuously removing a portion of the small debris population, flight safety and free access to space can be permanently maintained," Kaplan said. "This is a permanent system. You can't do it once and go away."