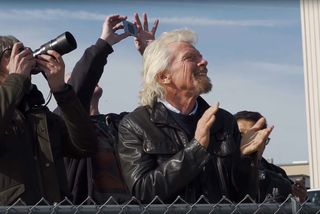 The beginning of Virgin Galactic's latest SpaceShipTwo video shows Branson casually sipping take-out coffee ahead of the Feb. 24 flight of the VSS Unity. It ends with him jogging alongside a crowd of onlookers, high-fiving a line of people.

In the video's narration, Branson is bullish about the future of space tourism. [How Virgin Galactic's SpaceShipTwo Works (Infographic)]

"By the end of this, I hope that hundreds of thousands of people will have had the chance of becoming astronauts," Branson said. "I hope that the technology that we develop here will enable people to travel around the world in an environmentally friendly way at incredible speeds."

Virgin Galactic plans to build a fleet of these vehicles to take paying space tourists to suborbital space. SpaceShipTwo would ride to a high altitude aboard a carrier aircraft. Then, it would separate for a brief, suborbital flight, soaring 62 miles (100 kilometers) above the planet. The spacecraft can carry six passengers and two pilots, and passengers will experience several minutes of weightlessness.

Tickets for each flight are currently listed at $250,000 apiece. Virgin Galactic's first flight date in space, however, has been pushed back by technical delays and a test flight crash that killed one pilot in October 2014.

The new video strikes an optimistic tone, however. British physicist Brian Cox was on hand to watch SpaceShipTwo fly, and he said in the video that he can't wait to get on board a flight. He has been asked many times over the years if he wanted to go to space, he said, but it wasn't until he saw the spacecraft that he decided to do it.

"I know it's a dangerous thing to do," he said in the new video. "However, the moment I walked in the hanger and saw the aircraft, I thought, 'I want to get on the aircraft.' So now, the answer is 100 percent yes."