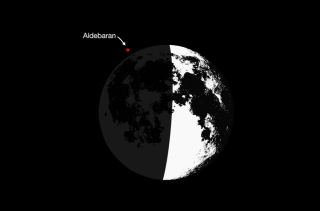 The moon will pass before the bright star Aldebaran on Saturday, March 4.
(Image: © NASA)

One of the sky's brightest stars will vanish behind the moon as seen from most of the contiguous U.S. and Central America on Saturday night. This stellar eclipse will be widely visible at a convenient time: For the West, it will happen early in the evening, while viewers on the East Coast can watch the event in the late evening hours, approaching midnight. Regardless of where you live in the U.S., you could hardly ask for a better occultation than this!

Aldebaran is the brightest and one of the most colorful stars that can be hidden by the moon, and on Saturday night, it will disappear behind the dark portion, or "limb" of an almost-first-quarter moon (46 percent illuminated). If you're looking up at just the right moment, you should be able to see Aldebaran disappear with just your naked eye. Of course, binoculars or a telescope will provide a more stunning view. Here is an excellent chance to involve friends, family and even members of the general public in a most interesting astronomical event.

For the West, the moon will ride high in the southwest sky. In the East, the moon will appear much lower in the sky, as far down as 15 degrees above the west-northwest horizon (your clenched fist held at arm's length measures about 10 degrees). The moon will set at around 12:45 a.m. local time early Sunday morning. Skywatchers in the East should choose observing locations carefully to ensure that mountains, trees and buildings do not obscure the view.

Notice that the farther south you go, the longer Aldebaran will remain hidden by the moon. In Los Angeles, Aldebaran will be out of sight for 79 minutes, but in New York, the occultation will last only 21 minutes.

For a map depicting the viewing zone as well as a listing of hundreds of locations providing the times of immersion and emersion, visit the International Occultation Timers Association (IOTA)'s handy reference page: http://www.lunar-occultations.com/iota/bstar/0305zc692.htm.

When Aldebaran reappears from behind the moon's bright limb, you'll need a telescope to spot the orange, 1st-magnitude star through the bright glare of the sunlit lunar edge.

The most exciting part of this event is viewing Aldebaran as it appears to literally skim the moon's limb. The star will be grazingly occulted for viewers at the northern limit line, extending from southern Vancouver Island, east along the border separating British Columbia from Washington state, then east-southeast from northern Montana to the central Great Lakes, finally moving out over the Atlantic Ocean at the coast of Rhode Island south of Newport.

The graze line will skim across the Canadian city of Mississauga, Ontario, the southern outskirts of Rochester, New York, and the northern part of Hartford, Connecticut. For a detailed view, see IOTA's webpage, with maps of various sections of the graze line: http://occultations.org/aldebaran/2017march/.

The line is actually a path no more than a couple of miles wide, within which telescope users can see Aldebaran vanish and reappear several times as the mountainous limb of the moon glides by. Observers north of the path will see a near miss.

Aldebaran subtends, or crosses the moon an angle as large as 21 hundredths of an arc second, corresponding to 40 meters (130 feet) at the moon's distance. Because of this, observers in the graze path may notice that some disappearances and reappearances take place ever so gradually rather than instantaneously. Partial blinks and flashes are also possible when features at the lunar limb fail to completely hide the star. The coming graze will take place mainly along the dark lunar limb, perhaps faintly illuminated by "Earthshine." However, mainly west of Montana, the graze will take place among sunlit lunar mountains.

The next occultation of Aldebaran visible from the United States will be on the morning of Aug. 16 with a waning crescent moon, but it will be observable only from the state of Florida. During the evening hours of Nov. 5, a waning gibbous moon will cross in front of Aldebaran for much of North America. And finally, on the evening of Dec. 30, a waxing gibbous moon will occult Aldebaran for the last time in 2017.

But the best of the lot will be this Saturday's event. So here's hoping for clear skies!

Editor's note: If you capture an amazing photo of the moon and the bright star Aldebaran, or any other night sky view, and you'd like to share it with Space.com, send images and comments in to managing editor Tariq Malik and the team at spacephotos@space.com.