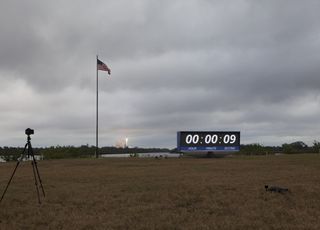 A SpaceX Falcon 9 rocket launches its first cargo mission for NASA from the agency's historic Pad 39A, with a U.S. flag and NASA countdown clock in the foreground, in this view from the Kennedy Space Center in Cape Canaveral, Florida on Feb. 19, 2018.
(Image: © Ralph Martinez/NASA)

CAPE CANAVERAL, Fla. — SpaceX's historic launch from NASA's Launch Complex 39A Sunday (Feb. 19) was a complete success. So it's no surprise that when the time came to discuss the flight, the post-launch press conference was short, sweet and full of smiling faces.

The private spaceflight company's Falcon 9 rocket launched a Dragon spacecraft full of cargo into orbit at 9:39 a.m. EST (1439 GMT), after which the booster's first stage returned to Earth to make had a perfect landing at the company's Landing Zone 1 at Cape Canaveral.

"It's been a super-exciting day — it's really awesome to see 39A roar back to life for the first time since the shuttle era, and it was extremely special that this first launch on 39A was a Dragon mission for NASA to the space station," Jessica Jenson, the Dragon mission manager at SpaceX, said during the briefing. Pad 39A was used for most of the Apollo missions and many shuttle missions, including the first and the last launches; SpaceX modernized the pad under a 20-year lease from NASA. [Watch: The Most Historic Launches Ever from Pad 39A]

"This is a huge deal for us," she added.

Jenson is anticipating just a two-week turnaround before SpaceX's next launch from Pad 39A, and the first reused booster will eventually launch from that pad as well. Ultimately, the site will become the primary launchpad for the Falcon 9 Heavy, SpaceX's huge heavy-lift booster, SpaceX representatives have said. The Falcon 9 launches will move to a repaired Pad 40 at the nearby Cape Canaveral Air Force Station (which was damaged last year in a Sept. 1 explosion). Jenson confirmed that SpaceX plans to launch an uncrewed test flight of the its Crew Dragon astronaut taxi by the end of this year, followed by a crewed flight in early 2018.

Sunday's liftoff was originally scheduled for yesterday, but it was called off with 13 seconds left on the countdown as a precaution due to an unexpected reading on the rocket's second-stage engine nozzle's position.

"Great launch today; we were really excited to see everything go well after yesterday's countdown fun," William Spetch, NASA's deputy manager of the International Space Station's transportation office, said during the briefing. "Dragon's on its way, space station is in great shape and really looking forward to getting the 5,000 plus pounds of cargo coming up to the vehicle."

Dragon bringing nearly 5,500 lbs. (2,500 kg) of supplies and experiments to the crew on the space station, including many science investigations. The spacecraft will take two days to reach the station, where it will be grappled by the crew and berthed early Wednesday morning (Feb. 22). [In Photos: SpaceX's 1st Launch from Pad 39A]

Their first priority to unpack? "We have a lot of time-critical stuff that we bring up that gets loaded very late into the vehicle, so the first steps for the crew will be getting that off-loaded on the vehicle and getting into the experiments," Spetch said. "One of the first things is the rodents, getting all of our mice set up in their accommodations on board."

The ground crew will be busy, too, using the station's robotic arm attachments to unload things from Dragon's unpressurized "trunk."

"The ground teams will be working very hard and very quickly on the robotics ops … to change out the science that's in the trunk, pull it out, and put it in spots in orbit and put additional cargo back in that's no longer being used."