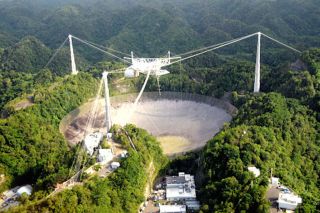 The 305-meter telescope at Arecibo is just one of a collection that SETI will use to search nearby stars for electronic signals that could indicate intelligent life. If such a civilization was utilizing a similar dish to image exoplanets, SETI's team should be able to detect it.
(Image: © Arecibo Observatory)

With SETI — the Search for Extra Terrestrial Intelligence — we use radio telescopes to search for signals from alien civilizations. This is a relatively passive system, where we sit back and listen for what signals might be out there. As of yet, the search has come up empty handed.

By contrast, "Active SETI" or what is now called Messaging Extra Terrestrial Intelligence, or METI, is a proactive system of sending a message to a specific place to say "hello" to let potential alien astronomers know we're here.

But the METI concept is a little controversial. Some scientists have warned the strategy could be dangerous, and famed theoretical physicist Stephen Hawking has said that alerting aliens to our existence might be asking for trouble. Hawking suggests that advanced aliens might only see us as annoying bacteria, or aliens stepping foot on Earth might be akin to when Christopher Columbus landed in the Americas, which "didn't turn out so well" for the native people.

However, claims of the dangers of METI are overstated, says Douglas Vakoch, a professor in the Department of Clinical Psychology at the California Institute for Integral Studies in California and president of METI International, an organization that looks to organize the efforts to send messages out into the cosmos.

RELATED: Sending Messages to Aliens: Could It Kill Us?

"When I talk with other scientists about the potential risk of METI, they agree that the public perception of the danger is overblown," Vakoch told Seeker. "And that's natural. We know that our brains are hard-wired to pay attention to vivid images of danger — even when the alleged risk isn't credible. So when Stephen Hawking warns that aliens could decimate Earthlings just as European explorers conquered the New World, that evocative image sets off our internal alarms — even if the scenario isn't logically consistent."

Vakoch says that when Hawking assumes that somehow advanced extraterrestrials will have the ability to travel between the stars, but they won't have the capacity to pick up our "leaked" TV and radio signals, that just doesn't make sense.

We've already had nearly 100 years of radio and television transmissions emanating from our planet as electromagnetic radiation. With those signals now having traveled almost 100 light-years, evidence of our existence is already spreading across the galaxy. With our growing database of known exoplanets, we now know that there are thousands of planets within a radius of 100 light-years. And it is quite likely that some of these worlds are Earth-like.

"Any civilization that has the ability to hear our message has likely already heard our 'leakage' so they already know we are here," said Vakoch.

So why bother sending messages at all? Because science.

When considering the pros and cons of METI, Vakoch reasons, it is important to use the tenets of science — and not emotional arguments — for several different reasons.

One principle of science is the importance of continually looking at the assumptions that drive our actions and if those assumptions are not warranted, being will to change course.

"I don't know of any astronomers who are actually engaged in SETI observations themselves who think it's dangerous to transmit," Vakoch said. "But when even the world's most brilliant cosmologist [Hawking] evokes images that just aren't plausible, creating fears that foreclose innovative scientific research, we need to step back and look for a more rational way to evaluate the situation. It's important to find a way to seriously consider the risks of METI, and not just rely on lurid images of alien conquest."

And in choosing the merits of specific METI projects, we should use a tried and true scientific method to help make logical judgments: peer review.

"When I talk with other scientists about making decisions about METI transmissions through the process of peer review, they say, 'That makes so much sense,'" Vakoch said. "Why create a whole new process for evaluating scientific projects when the normal way of doing science has that built in? Through the peer review process, scientists can dispassionately evaluate the specific proposal in front of them."

Vakoch said peer review would also help scientists move beyond simplistic 'either/or' thinking, of either it's worthwhile to do METI, or it's not.

"It's critical to evaluate the specific METI project that's being proposed, to see whether it's worth pursuing," Vakoch explained. "For example, we could test one version of the Zoo Hypothesis, which states that extraterrestrial intelligence may be much more widespread than we had imagined – perhaps inhabiting even nearby stars, but that we're not hearing from them because they require that we take the initiative in making contact. Well, we can test that hypothesis by transmitting powerful, intentional signals to the nearest stars. In the course of a few decades, we can see, very concretely, whether we get replies."

Which leads Vakoch to point out that scientific practices and principles should be used in helping to determine the best methods in which to conduct METI.

Since the mid-1970's, there have been about two dozen intentional messages sent out to the cosmos. These have all been one message, sent to a specific target in space. Vakoch said that approach needs to be modified.

"In SETI, when we see a signal and we see it only once, that is not compelling," Vakoch said in anIdea City talk last year. If other civilizations have that same axiom that science needs to be repeatable and verifiable, "we should be transmitting repeatedly if it is going to be taken seriously," Vakoch said.

Additionally, proponents of METI say messages should be targeted to stars in our own neighborhood.

Why? For example, in 1974 a brief symbolic image was transmitted towards the M13 cluster of stars, about 25,000 light years away.

"Instead of sending messages where it would take 50,000 years to get a reply," Vakoch said, "we should send messages to stars that are closer so that, even if it takes a decade or two to get a reply, at least it would be in a person's lifetime. That way you may actually get to test your hypothesis."

Moreover, since the role of science is to test hypotheses, Vakoch said, through METI we could empirically test several ideas and theories, such as the previously mentioned Zoo Hypothesis and several other proposed explanations for the Fermi Paradox, which speculates that if the universe is full of sophisticated races and civilizations, why haven't we heard from anyone yet?

Answering that question — and getting an answer to our call to the cosmos — could be one of the most profound events in the history of humanity.

RELATED: SETI Eavesdrops on Nearby Star in Smart Alien Hunt

Vakoch and those who endorse METI are hoping to organize the first efforts to send strong, repeated and intentional messages to nearby star systems, but know they need additional scientific discussions to make it happen.

"At METI International, we're committed to encouraging broader debate about the pros and cons of transmitting intentional messages into space," Vakoch said.

He explained how METI International has recruited a distinguished Advisory Council of over 50 leading scholars from 16 countries, representing a broad range of disciplines in the sciences, humanities, and arts, to provide their insights. And there will be events and discussions available for the public.

On May 25, 2017, there will be a daylong workshop in St. Louis, Missouri, which will discuss two interrelated METI issues.

"First, how detectable is life on Earth already — either microbial life, or technological life as seen through our leakage radiation? In short, is it too late to be quiet?" Vakoch said. "Second, how do we balance the risks and benefits of METI, and what are the related policy and ethical issues? These are deeply scientific, technical matters, but they also have broader societal impact."

Would you send a message to alien civilizations? And if so, what would you say?