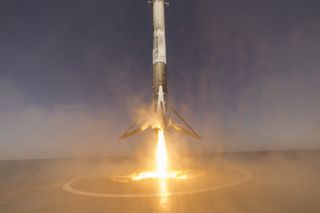 The first stage of SpaceX’s Falcon 9 rocket touches down on the drone ship "Just Read the Instructions" on Jan. 14, 2017, shortly after helping to loft 10 satellites for the communications company Iridium.
(Image: © SpaceX Twitter)

The Trump administration is considering shifting NASA's focus toward "the large-scale economic development of space," according to Politico.

The new vision for NASA would pit "old space" stalwarts such as Boeing and Lockheed Martin against "new space" upstarts such as SpaceX and Blue Origin, in a race to jump-start a new space economy, Politico reported today (Feb. 9), citing internal Trump administration documents.

These spaceflight companies would compete to mount a variety of missions, including bold journeys to the moon.

"The more ambitious administration vision could include new moon landings that 'see private American astronauts, on private spaceships, circling the moon by 2020; and private lunar landers staking out de facto 'property rights' for America on the moon, by 2020 as well,' according to a summary of an 'agency action plan' that the [Trump] trasition [team] drew up for NASA late last month," Politico wrote.

The plan would also turn over low-Earth orbit (LEO) more fully to the private sector, which would operate space stations and tourism activities. (The federal government would retain a foothold in LEO with its military and reconnaissance satellites.)

"NASA's new strategy will prioritize economic growth and the organic creation of new industries and private-sector jobs, over 'exploration' and other esoteric activities," the action plan summary states, according to Politico. "Done correctly, this could create a trillion-dollar-per-year space economy, dominated by America."

Read the full story at Politico.