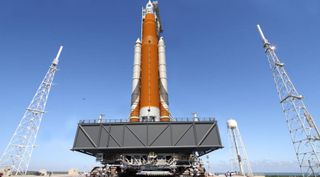 WASHINGTON — The Commercial Spaceflight Federation (CSF) says it supports the continued development and use of NASA's Space Launch System, a move that may help placate space policy tensions in the new administration.

In a speech opening the 20th Annual Commercial Space Transportation Conference here Feb. 7, Alan Stern, chairman of the board of the industry group, said the organization believes that the SLS could potentially be usefulfor its members.

"The exploration of space for all purposes, including commercial spaceflight, is our interest. And to that end, the CSF is announcing that we see many potential benefits in the development of NASA's Space Launch System," Stern said in his remarks. "The SLS can be a resource that benefits commercial spaceflight." [Space Launch System: NASA's New Megarocket in Pictures]

Stern said in an interview after his speech that support for SLS came up in a meeting of the CSF's board the previous day. "CSF has evolved over the years. There's a strong net benefit in SLS," he said.

That support comes, though, as some of CSF's own member companies are developing their own heavy-lift vehicles. SpaceX is planning the first launch of its Falcon Heavy rocket later this year, and unveiled plans for a far larger booster last year as part of its Interplanetary Transport System. Blue Origin also plans to debut a heavy-lift rocket, the New Glenn, by the end of the decade, with notional concepts for a potentially much larger vehicle called New Armstrong.

The only disclosed price so far for those commercial heavy-lift vehicles is for the Falcon Heavy, which SpaceX offers for as low as $90 million. By contrast, Bill Gerstenmaier, NASA associate administrator for human exploration and operations, said at the conference later in the day the estimated price for a single SLS launch is approximately $1 billion for a vehicle with no more than twice the payload capacity of the Falcon Heavy.

Stern said he was not worried about endorsing a vehicle that could compete with those commercial alternatives. "The market will sort that out," he said.

A bigger factor in CSF's endorsement of the Space Launch System may be to alleviate any political tensions, particularly during a presidential transition. Some commercial space advocates have in the past argued against continued development of the SLS, claiming that the program is a waste of money, particularly with the emergence of commercial alternatives that promise to be far less expensive.

"There are a lot of interests in CSF that see new markets and interest in exploration capability that SLS can provide," Stern said, citing as one example commercial opportunities in a human return to the moon. "We just wanted to get it out there that, if you're looking at us and thinking we're against it, we're actually for it."

The new Trump administration has not stated a position on the development of SLS or other major space policy issues since taking office last month. There have been rumors of proposals to the new White House to at least compare the capabilities of the SLS and related systems, like the Orion spacecraft, with commercial alternatives, but no indication yet of how strongly they are being considered.

Congressional support for SLS, though, remains strong. In recent years House and Senate appropriators have increased the budget for the SLS above the administration's request, pressing NASA to both keep SLS on schedule and to accelerate development of an advanced upper stage that will increase the vehicle's payload capacity.

"We obviously have to also make certain that the SLS rocket is fully funded, that it stays on time and on track," said Rep. John Culberson (R-Texas), chairman of the appropriations subcommittee that funds NASA, in a Feb. 7 speech at a Space Transportation Association luncheon.

Culberson added that he considered SLS essential infrastructure for the nation and suggested that it be included in any broader infrastructure bill that the Trump administration may propose in the coming months, comparing it to President Eisenhower's support for the development of the interstate highway system. "It would be marvelous to have President Trump remembered for the interplanetary highway system as well," he said. "We've got to have a heavy-lift capability."