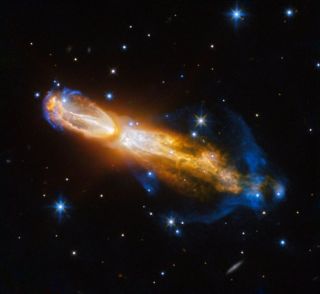 The Calabash Nebula, also known as the Rotten Egg Nebula, is currently transitioning from a red giant to a planetary nebula, a wild rush that lasts only a few thousand years.
(Image: © ESA/Hubble & NASA)

A star's demise shines in stunning detail in an image released by the Hubble Space Telescope.

The image captures the Calabash Nebula, which is 1.4 light-years across and located 5,000 light-years from Earth. It's better known as the Rotten Egg Nebula, because it contains large amounts of sulfur, part of the compound that gives sulfur springs and rotten eggs the same unfortunate smell.

The system is in the middle of a violent transition: A red giant star began to shed its outer layers of gas and dust rapidly, accelerating them in opposite directions. The gas visible in yellow here is moving as fast as 1 million km/h (600,000 mph). While larger stars might flame out in a supernova explosion, lower-mass stars undergo this comparatively mild departure. Calabash was a star of that size, as is Earth's sun currently. [Strange Nebula Shapes: What Do You See?]

The gas in blue is the surrounding material being pushed out of the way. The big acceleration likely started about 800 years ago, according to NASA. But the frantic pace won't last long, on a cosmic scale, before it transitions to a more long-lasting, slowly expanding feature.

"Astronomers rarely capture a star in this phase of its evolution, because it occurs within the blink of an eye — in astronomical terms," European Space Agency officials said in a statement. "Over the next thousand years, the nebula is expected to evolve into a fully fledged planetary nebula."