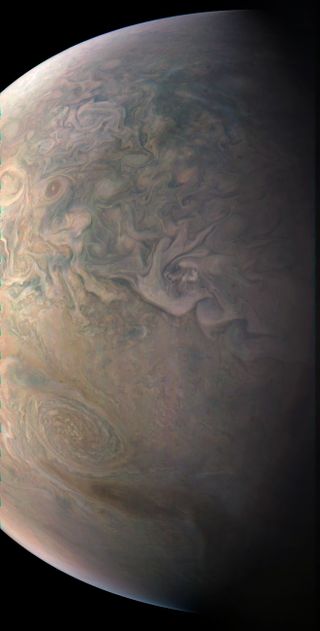 This tempest is the third largest anticyclonic reddish oval on Jupiter and has been tracked by observers on Earth for over two decades. "An anticyclone is a weather phenomenon with large-scale circulation of winds around a central region of high atmospheric pressure," NASA officials said in a statement. "They rotate clockwise in the northern hemisphere, and counterclockwise in the southern hemisphere."

Despite its name, the Little Red Spot looks more like a light brown smear. The storm (shown in the bottom left portion of the image) is difficult to discern from the surrounding, similarly colored clouds. [Gallery: Jupiter Probe Images Made Into Stunning Art]

When this image was taken on Dec. 11, Juno was just over 10,000 miles (16,000 kilometers) about the planet's could tops. Citizen scientists Gerald Eichstaedt and John Rogers later processed the raw image to create this stunning work of art, which NASA shared publicly on Jan. 25. JunoCam has returned many images which can be viewed at the JunoCam community website.

Juno launched in 2011 and arrived at Jupiter in 2016. The craft is planned to deorbit and plunge into the planet in early 2018. NASA's Jet Propulsion Laboratory at Caltech manages the Juno mission, which is part of NASA's New Frontiers Program.