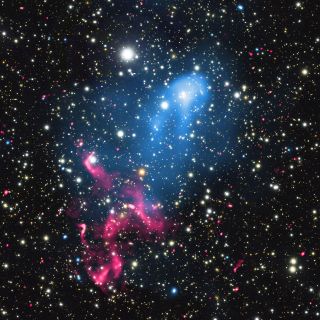 Astronomers have discovered an immense surge of energy coming from a cosmic particle accelerator located about 2 billion light years from Earth. It's powered by interactions between a supermassive black hole and the colliding galaxy clusters Abell 3411 and Abell 3412.

Using several telescopes, researchers have traced extremely energetic particles back to a giant black hole shooting out matter, and this material is then caught up in the galaxy merger, flinging the particles away with even more power. The research team compared the process to launching a rocket into low-Earth orbit and then sending that rocket out of the solar system with another rocket blast.

"We have seen each of these spectacular phenomena separately in many places," study leader Reinout van Weeren, a fellow at the Harvard-Smithsonian Center for Astrophysics (CfA), said in a statement. "This is the first time, however, that we['ve] seen them clearly linked together in the same system."

Researchers now know that a supermassive black hole in one of the galaxy clusters created a magnetic funnel, which generates powerful electromagnetic fields. The fields then accelerate the gas away from the black hole into a jet.

Inside the jet, the particles are pushed again when they hit shock waves coming from gas-cloud collisions within the two merging galaxy clusters. The "doubly accelerated" particles shine in radio wavelengths, which have been long observed (but not understood) in Abell 3411 and Abell 3412.

"These particles are among the most energetic particles observed in the universe, thanks to the double injection of energy," co-author Felipe Andrade-Santos, a postdoctoral research fellow at CfA, said in the same statement. The research team said that more examples of these particles should be found in future deep-space studies, using radio and X-ray wavelengths.

The results were presented at the American Astronomical Society meeting in Grapevine, Texas, Thursday (Jan. 5) and will be published in the inaugural issue of the journal Nature Astronomy. Observations were performed using the orbiting Chandra X-ray Telescope, the Giant Metrewave Radio Telescope (GMRT) in India, the National Science Foundation's Karl G. Jansky Very Large Array in New Mexico and several other telescopes.