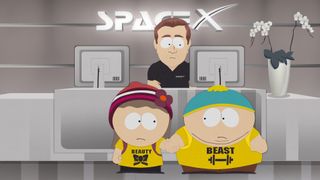 Cartman and his girlfriend, Heidi, visit SpaceX headquarters in an attempt to catch the next spaceship to Mars.
(Image: © Comedy Central)

Cartman and his girlfriend, Heidi, visited SpaceX headquarters in last week's episode of "South Park," eager to get on the first crewed spaceship heading for Mars.

In the episode, which aired on Comedy Central on Wednesday (Nov. 16), Cartman explains that he and his girlfriend have given up on social media and "would like to be as far away from the internet as possible" — and there's no Wi-Fi on Mars, he tells the SpaceX receptionist. However, Cartman is surprised to learn that it will be a while before humans travel to the Red Planet.

Cartman is told to "take a number and join the others" — and then SpaceX founder and CEO Elon Musk arrives to take him, Heidi and the rest of their fellow would-be Mars pioneers on a tour of the company's headquarters in Hawthorne, California. [SpaceX's Interplanetary Transport System for Mars Colonization in Images]

"The only way for humankind to survive is with imagination and technology," Musk tells the tour group as he shows them everything SpaceX is working on to eventually colonize Mars. This includes unveiling a 4-inch-wide (10 centimeters) pizza that, when heated, expands to feed 100 people. (Musk calls this amazing invention the "Pizza Pocket.") He also shows them a tube-based transportation system called the Hyperloop that's actually real — or could be in the not-too-distant future. (Musk laid out the Hyperloop idea in 2013 and has asked researchers and students around the world to help figure out how to make it work.)

However, Cartman is interested only in seeing the Mars rocket.

After showing off SpaceX's Falcon 9 rockets, which are able to launch into space and land safely back on Earth for reuse, Musk breaks the bad news to the group:

"We’re still about 10 years away from going to Mars, maybe eight," he says. "Going to Mars is going to take a lot of very smart people, working very hard for a very long time." (According to Inverse.com, the voice behind Musk's character is the real Elon Musk.)

Earlier this year (Sept. 27), Musk announced SpaceX's reusable Interplanetary Transport System (ITS), which will combine the most powerful rocket ever built with a spaceship designed to carry at least 100 passengers. This is part of the company's plan to help establish a million-person Mars colony within the next 50 to 100 years.

However, this is not exactly the time frame the characters of "South Park" are looking for — they want to go to the Red Planet now. In fact, Cartman has been thinking of going to Mars for a while. In an earlier episode ("Fort Collins," which aired Oct. 26), Cartman was caught daydreaming of a Martian colony, which featured a neon-colored roller coaster.