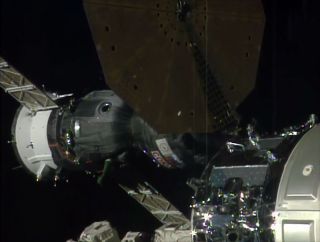 Cosmonaut Oleg Novitskiy of the Russian federal space agency Roscosmos, astronaut Peggy Whitson of NASA and French astronaut Thomas Pesquet of the European Space Agency (ESA) arrived at the space station at 4:58 p.m. EST (2158 GMT), docking their Soyuz MS-03 spacecraft to the orbiting laboratory’s Rassvet module. The hatches linking the Soyuz and the ISS are scheduled to open at about 7:35 p.m. EST today (0035 GMT Sunday); you can watch that event live here at Space.com, courtesy of NASA TV, with coverage starting at 6:45 p.m. EST (2345 GMT).

The linkup, 260 miles (419 kilometers) above Earth, took place two days after the crew lifted off from the Baikonur Cosmodrome in Kazakhstan on Thursday (Nov. 17). [Blastoff! New Crew Heads to Space Station (Video)]

Novitskiy, Whitson and Pesquet are joining the Expedition 50 crew, which is led by commander Shane Kimbrough of NASA and also includes flight engineers Sergey Ryzhikov and Andrei Borisenko of Roscosmos, who arrived at the space station in October. The six crewmembers will staff the orbiting lab through February, helping to conduct hundreds of experiments and studies in biology, biotechnology, physical science and Earth science until Kimbrough, Ryzhikov and Borisenko depart for Earth.

Among the research they will perform includes recording how lighting impacts the overall health and well-being of station crew members and how the microgravityenvironment in orbit affects tissue regeneration in humans and the genetic properties of space-grown plants.

Two more crewmates, Alexander Misurkin of Roscosmos and Mark Vande Hei of NASA, will join Expedition 51 from March to May.

In addition to their science tasks, the crewmembers are scheduled to receive three cargo deliveries of several tons of food, fuel, supplies and research, as well as new lithium ion batteries to replace the nickel-hydrogen batteries currently used on the space station to store electrical energy generated by its four largesolar arrays. The batteries will be installed during a series of spacewalks, currently scheduled for January.

Whitson, Novitskiy and Pesquet are slated to return to Earth aboard the Soyuz MS-03 on May 15.

Whitson's flight to the space station and back will extend her existing record as the woman with the most time in space worldwide. Before launching on Thursday, Whitson had logged 377 days on two prior trips to the ISS. With the additional 179 days expected during Expedition 50/51, she will also the break the record for the most time in space by an American, surpassing NASA astronaut Jeff Williams' 534 days set in September.

When she touches down in May, Whitson will rank as the world's eighth-most experienced space flier, with a total of 556 days off the planet. (Leading the ranks is Roscosmos cosmonaut Gennady Padalka, who set his record 878th day in September 2015.)

Whitson has already set anotherrecordjust by launching into space: she is now the oldest woman to orbit Earth. Set to celebrate her 57th birthday on board the space station on Feb. 9, Whitson surpassed educator-astronaut Barbara Morgan, who was 55 when she launched on space shuttle Endeavour's STS-118 mission in 2007. (The oldest person to fly in space is John Glenn, who at 77 flew on shuttle Discovery in 1998.)

Pesquet, 38, is on his first spaceflight, a mission that ESA named "Proxima," continuing a French tradition of referring to stars and constellations. Pesquet is the 10th astronaut from France to fly into space and the last member of the European Space Agency’s 2009 astronaut class, nicknamed the "Shenanigans," to embark on a mission.

Soyuz MS-03 is the 49th Soyuz to dock to the International Space Station.