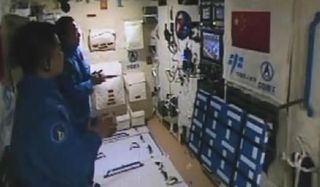 The two-man Shenzhou-11 crew of China's ongoing mission to the Tiangong-2 space lab has launched  a small "accompanying" satellite, according to state media reports.

Officials with China's Technology and Engineering Center for Space Utilization, under the Chinese Academy of Sciences, reported that the microsatellite is able to conduct efficient orbit control, process tasks autonomously and transmit data at high speeds. The newly-launched satellite has stronger capabilities compared with a small satellite that was dispatched during the three-person Shenzhou-7 spacecraft mission back in September 2008, according to the center.  [China's Tiangong-2 Space Lab Mission in Pictures]

At the end of October, the satellite will orbit close to Tiangong-2 and the docked Shenzhou-11 spacecraft to take photos using ahigh-resolution camera. The accompanying satellite will also carry out space experiments with Tiangong-2, according to a description.

In a CCTV-Plus interview, Wang Longji, scientist, Environment Control and Life Support Lab, China Astronaut Research and Training Center explains:  "First, we want to check the water control and nutrition transmission and measurement technologies. Second, we want to check the technologies for sowing seeds, pulling up unnecessary seedlings and looking after plants automatically while in orbit," Wang said. "Third, we want collect data concerning the volume of oxygen produced by photosynthesis, the harvest yield, and the plants' nutritional quality and edibility. Fourth, the plant cultivation experiment will bring happiness to the astronauts and improve their working efficiency and moods during their 30-day stay in space."

According to Yang Liwei, nearly 40 experiments have been arranged for this space voyage, sixteen of which are related to aerospace medicine and four of which concern application practices.

"All the experiments are in preparation for our future space station," Yang said in a CCTV-Plus interview. "The space lab is built for our experimental needs and for us to accumulate experience. So, according to our arrangements, the tasks will be carried out one by one. The workload is really heavy. As the other experiments are gradually launched, the situation will become more and more complicated and varied for the two astronauts."