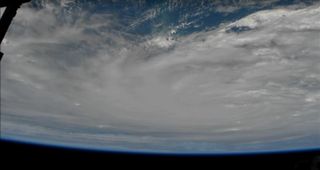 Hurricane Matthew as seen from the International Space Station on Oct. 6, 2016.
(Image: © NASA)

At about 4:45 p.m. EDT (1845 GMT) today, cameras aboard the ISS recorded video of Hurricane Matthew rumbling toward the Atlantic coast of Florida, which the storm is expected to hit in earnest for the first time tonight.

The storm was about 100 miles (160 kilometers) east-southeast of West Palm Beach, Florida, and was moving northwest at about 14 mph (23 km/h), according to the NHC's latest update.

Hurricane Matthew has already left a trail of wreckage in the Caribbean, killing more than 100 people as it churned through Haiti and the Bahamas. And things will probably remain bad when the storm reaches the United States; the NHC update warned of "potentially disastrous impacts for Florida," and President Barack Obama has already declared a state of emergency in the state.

"The combination of a dangerous storm surge and the tide will cause normally dry areas near the coast to be flooded by rising waters moving inland from the shoreline," the NHC update said. "There is a danger of life-threatening inundation during the next 36 hours along the Florida east coast, the Georgia coast and the South Carolina coast, from Deerfield Beach, Florida, to South Santee River, South Carolina."

To get the latest information about Hurricane Matthew and its potential impacts, keep checking back with the NHC's Matthew page here: http://www.nhc.noaa.gov/#MATTHEW