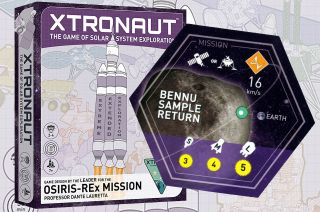 Xtronaut: The Game of Solar System Exploration was designed by the principal investigator of NASA's OSIRIS-REx mission, Dante Lauretta.
(Image: © Xtronaut via collectSPACE.com)

He successfully launched a probe on a mission to "journey out to a near-Earth asteroid and retrieve a sample from the surface."

He assembled an Atlas V rocket, planned a trajectory that included an Earth gravity assist and successfully managed beneficial and detrimental actions, including a government shutdown, a budget surplus and the salvage of a key part from another mission's design.

Oh, and he did all that in real life, too. [OSIRIS-REx: NASA's Asteroid Sample-Return Mission in Pictures]

Lauretta, a professor of planetary science at the University of Arizona, is the principal investigator for NASA's Origins, Spectral Interpretation, Resource Identification, Security, Regolith Explorer, or OSIRIS-REx, which is now on a seven-year mission to return soil and rock (regolith) samples from a small asteroid named Bennu.

He's also the inventor behind Xtronaut: The Game of Solar System Exploration.

The board game, which officially is only indirectly related to OSIRIS-REx, does include a goal patterned directly on the journey to an asteroid and back.

"I made sure that 'Bennu Sample Return' was in Xtronaut," Lauretta said.

Lauretta didn't originally set out to develop a board game.

"Xtronaut originated in an after-school science club I was running with the Boys and Girls Clubs in Tucson, trying to inspire the local kids and make them aware of all the cool space exploration stuff that we do locally," he described in an interview. "I noticed a common misconception was that most of the kids thought the rocket was the actual vehicle that went on these missions of exploration."

"They didn't appreciate that you throw away 99 percent of all the hardware just to get the satellite where it needs to do go."

So Lauretta drew up a set of flash cards that each had a different component of a launch vehicle.

"We would 'launch' them and kind of just throw away the components as they would in a real launch sequence. The kids started to make a game out of it, kind of a trading-card game, and they wanted to know about the different kinds of rockets," Lauretta recalled.

And so Xtronaut began to take shape. Lauretta devised a game that involves two to four players assembling a rocket from its various major parts — each with its own card — while having to manage challenges like a "Financial Audit," which allows a player to randomly pick cards from another player's hand.

"You have to make decisions about what you keep in your hand and what you play on your board while being aware there are action cards that allow players insight into those reservoirs," Lauretta described.

Xtronaut players earn points by launching missions, such as the Bennu sample-return based on OSIRIS-REx. Other missions include sending a spacecraft to orbit Jupiter's ice-covered moon Europa, land a probe on the Martian moon Phobos or send an orbiter out to Pluto.

"You're trying to complete a planetary exploration mission," explained Lauretta. "The key driver of that is the parameter we call 'delta-v,' which is the change in velocity. It is really the energy currency of solar system exploration."

Players can also collect gravity-assist cards, which can be used to accelerate or redirect their small, medium or large orbiter, lander or rover to their destination.

"We have one of these on OSIRIS-REx — an Earth-gravity assist, which we use to change the orbital plane inclination to match that of asteroid Bennu," Lauretta noted.

The less complex a mission is to complete, the fewer points the player earns. The first player to 10 points wins.

"The easiest mission in the game is the low Earth orbiter; it [has a delta-v requirement of] 9 kilometers per second [5.6 miles per second], very easy to accomplish, and therefore worth fewer points. The hardest mission in the game, Mars sample-return, requires both the largest rocket and gravity assists in order to accomplish. It is worth the most points," said Lauretta.

A win for outreach

The "delta" that took Xtronaut from an after-school activity to being sold on Amazon came in 2013, when funding for education and public outreach was pulled from the budget for the OSIRIS-REx mission.

"I was pretty torqued about that because I think one of the great values — and one of the real reasons we invest in these types of programs as a nation — is the inspirational and educational value, to show the great things that can be done when people come together to focus on a job like this," said Lauretta.

"So, I took it upon myself to do this privately and created the Xtronaut Enterprises company," he said.

Working with Tech Launch Arizona, a program that seeks to commercialize the technology developed under federal contracts at the University of Arizona, Lauretta was able to advance Xtronaut to become a commercial product.

"I hold a license agreement through Xtronaut Enterprises with the University of Arizona so I can use the intellectual property [that OSIRIS-REx] generates, like graphic art and our '321Science' videos and things like that, so that is an official connection, but that is distinct and not affiliated with NASA in any way," explained Lauretta.

Lauretta and the OSIRIS-REx team did partner with The Planetary Society to collect names and art to launch on the mission. They also collected brief predictions as to what the world will be like in 2023, when the samples will return to Earth.

But Lauretta sees Xtronaut as achieving at outreach where the asteroid mission's official activities can or have not.

"What makes me happiest is I am getting a lot of feedback from players that kids are enjoying the game, even kids as young as five years old, which is my inspiration and what I am going for," he said.

And like OSIRIS-REx, which is now soaring out to Bennu, Lauretta is not stopping with Xtronaut's launch. He has the idea for a new game that captures the international aspect of space exploration and focuses on planetary science.

For more about OSIRIS-REx, see the mission's website at asteroidmission.org. Xtronaut: The Game of Solar System Exploration is now available on Amazon.