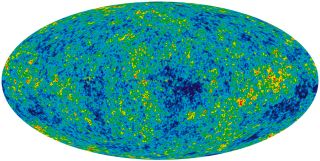 Unfortunately, the Big Bang theory can be a pretty contentious topic. You mention it in casual conversation (well, maybe you don't, but I drop it into as many inappropriate places as possible), and some folks get all up in arms and defensive.

When this happens, I take a long breath and recite my Big Bang Mantra: The Big Bang is not a theory of the creation of the universe, but a model of the history of the universe. Look, I'll even show you a baby picture!

And at this point I pull out my wallet. Instead of smiling kids or cozy family group shots, I've got the cosmic microwave background (CMB). It's about the right age: it's a photograph of the universe when it was only 380,000 years old, which is equivalent to a picture taken of a baby at the end of its first day. [Cosmic Microwave Background: Big Bang Relic Explained (Infographic)]

That image is solid evidence, a smoking microwave gun, in favor of the Big Bang theory. Scientists are some of the most critical people you'll ever meet, forever reluctant to accept a new idea. It took decades of developing theories and accumulating evidence before the Big Bang was even warmly thought of, but the detection of the cosmic microwave background forced even the most truculent astronomers to grudgingly accept it.

The early universe was a hot and sweaty place, a seething mosh pit of electrons, protons and high-energy photons. The CMB was released when the universe cooled off juuuust enough that stable atoms could form, turning the entire universe transparent and letting that high-energy light go free. Over the eons that radiation has traveled the cosmos, stretching along with the expansion of the universe, shifting down from white-hot intensity to a feeble few Kelvin above absolute zero.

That leftover light is in the form of microwaves, and is incredibly, fantastically … boring. To one part in 10,000, it's exactly the same, from one end of the sky to the other.

But if you examine those minute differences, strange features appear. Some parts of the CMB sky are 0.0001 Kelvin hotter or cooler than others. There are big patches twice the width of the full moon, and many small bumps and wiggles overlying them. What's going on?

Seeing what the universe is saying

Those larger patches in the CMB are the early universe rocking out. In that hot dense plasma of the infant cosmos, gravitational pressures pulled gases in, and radiation pressure pushed those gases back out. This constant seesaw reverberated throughout the volume of the universe, echoing from one end to the other.

What we see in the CMB is a frozen moment in time, the drums in mid-beat, the cymbals in mid-crash, the guitar in mid-note. Once the radiation disconnected from the protons and electrons, the music couldn't go on, but an image of it remained. Caught in the act, some parts of the universe were slightly denser and hotter than others, and these patterns imprinted themselves on the radiation left behind.

So when we examine those 1-in-10,000 differences, we're really mapping out the state of the universe as it was just 380,000 years into the cosmic concert.

The beautiful technical term for this process is "baryon acoustic oscillations." Baryon = stuff. You and me are made of baryons. Acoustic: something to do with sound. Oscillations: something to do with waves. It's really a fancy way of saying "sound waves," but hey, what's the point of getting a Ph.D. if you can't say fancy things every once in a while?

[Watch this video to learn more about sound waves in the early universe.]

A lesson in flatness

Those bumps and wiggles in the CMB — those echoes of the crashing chaotic cosmic symphony — are a treasure trove of information. By studying the CMB, we are looking directly at the early universe, and we can use those glorious photons to deduce all sorts of juicy cosmological information.

For example, the global shape of the universe. The big patches in the CMB give us a very handy ruler for measuring shapes. It turns out it's really, really easy (well, OK, only sort-of easy) to figure out how big the patches ought to be. Sure, the universe back then was a crazy-hot plasma, but we're pretty good at figuring out how crazy-hot plasmas operate, especially when the universe was still young and hadn't developed complex structures yet.

We can compare how big those patches ought to be to how they look. If the universe was curved on a global scale (like, say, the surface of a sphere), light from the CMB would bend on its way to Earth, either converging or diverging — making the patches look bigger or smaller than they should.

The result: the scale of the largest patches is precisely what we would expect for a perfectly flat universe. Parallel light rays in our cosmos stay parallel. No hints of exotic geometry to report.

[Watch more about cosmic flatness in this video.]

That's not all. The CMB teaches us about the composition of the early universe. Neutrinos zooming around? Dark matter lurking mysteriously? Exotic relics of even earlier epochs wreaking havoc? All those things affect the statistics of the bumps and wiggles in the CMB: how large the largest patches are, how many large versus small patches, the maximum or minimum temperatures, etc. We can toss in any ingredient we want and see how it affects the detailed structure in that ancient light pattern.

The result from decades of analysis of the CMB: We live in a flat universe, dominated by dark energy, with a healthy dose of dark matter, and a few floating bits of normal everyday matter to lighten things up.

We're still not exactly sure what dark matter and dark energy are, but no matter what, the overall picture of the Big Bang remains unchanged: At one time, the universe was small, hot, and dense, and it left us a postcard.

Learn more by listening to the episode "What is the Cosmic Microwave Background? (Part 2)" on the Ask A Spaceman podcast, available on iTunes and on the Web at http://www.askaspaceman.com. Thanks to Arlington T., Jeffrey B., Edward J., Jason A., Ernie J., Rea N., Chris L., and Randy B. for the questions that led to this piece! Ask your own question on Twitter using #AskASpaceman or by following Paul@PaulMattSutter and facebook.com/PaulMattSutter.