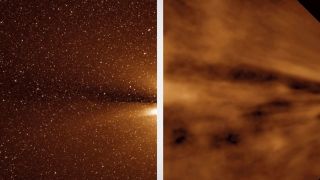 The solar wind's evolution is finally coming to light, thanks to new analysis of observations from NASA's Solar Terrestrial Relations Observatory (STEREO).

The twin spacecraft (known as STEREO-A and STEREO-B) studied the sun's edge to see how the constant flow of charged particles known as the solar wind originates. Since solar storms containing these particles can damage satellites and power lines, understanding how these particles are generated is key to improving safety on Earth, NASA officials said in a statement. A new video explains the transition of the particles from the sun's outer atmosphere to solar wind.

We've known about the solar wind since the 1950s, but its evolution has been hard to figure out. Prior to that time, scientists knew that the sun and its atmosphere are made of plasma, which are charged particles that separate at extremely high temperatures. [How the Sun's Magnetic Field Works (Infographic)]

These positively and negatively charged particles stream out from the corona (the sun's outer atmosphere) and fill the solar system, stretching well beyond Pluto. The new analysis shows that the plasma undergoes changes as it moves farther from the sun.

"As you go farther from the sun, the magnetic field strength drops faster than the pressure of the material does," Craig DeForest, lead author of the paper and a solar physicist at the Southwest Research Institute in Colorado, said in the statement. "Eventually, the material starts to act more like a gas, and less like a magnetically structured plasma."

While scientists have previously believed that magnetic forces are dominant at the corona's edge, this is the first time that they have actually seen it. The effect is very hard to catch on camera, because the plasma is tenuous and scatters sunlight.

To observe the effect, scientists processed the images to take out light sources more than 100 times brighter than the plasma itself. Examples of light sources include dust in the inner solar system, light from the sun and stars in the background.

STEREO's work will help scientists better understand the observations of NASA's Solar Probe Plus mission, which is expected to launch in 2018, according to the agency. Solar Probe Plus will zoom into the sun's corona to get even more information about how the solar wind comes to be, and changes.

The new analysis of STEREO data was recently published in The Astrophysical Journal. The data was obtained in December 2008, when both spacecraft were fully functional. Nearly two years ago, STEREO-B lost communication with Earth during a planned reset. Controllers regained contact with the spacecraft late last month, and are checking to see how healthy it is.