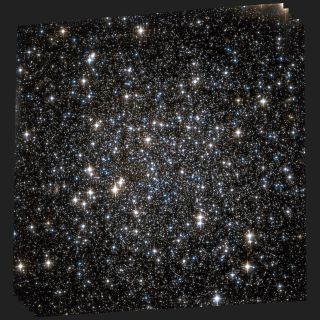 Hundreds of black holes could be lurking inside a cluster of stars that orbits the Milky Way galaxy, a new study shows.

NGC 6101 is a globular cluster (a dense, spherical collection of ancient stars) orbiting the center of the Milky Way. Using computer models, scientists recently showed that some strange characteristics of NGC 6101 could be explained by the presence of hundreds of black holes — something scientists have never observed in a globular cluster.

Black holes can form when massive stars die in a fiery explosion called a supernova. This type of blast is thought to kick the black hole away from its birth site, according to Mark Gieles, a professor of astrophysics at the University of Surrey in England and one of the authors of the new study. But the existence of so many black holes within the globular cluster would suggest that these "kicks" are not as powerful as scientists previously thought, Gieles said in a video detailing the new work.

Finding black holes is difficult, because astronomers can't see them the same way they can see stars and other objects in the universe. That's because black holes are so dense that not even light can escape the pull of their gravity.

While black holes may be difficult to spot, computer simulations can help predict where they might be hiding. Gieles and colleagues at the University of Surrey were inspired to create simulations of NGC 6101 after another group published their observations of the cluster last year.

The cluster's structure didn't make sense at first. Usually, in globular clusters, heavy stars move to the center, while lightweight stars tend to migrate to the periphery — a process known as "mass segregation." But NGC 6101 has very few stars near its center. "We found that this is not at all what you would expect for a normal stellar system," Gieles said in the video about the study.

"It reminded us of previous work where we looked at the influence black holes can have on globular clusters, and we had the idea, 'Maybe we could explain it by simply putting some black holes into the cluster,'" Miklos Peuten, a Ph.D student in astrophysics at the University of Surrey and lead author of the research paper, said in the same video.

To make sense of the missing mass segregation, the team recreated the entire 13-billion-year evolution of the cluster. Without black holes, the simulation didn't match their real observations of the system. But once they threw black holes into the mix, their simulations matched their observations perfectly. Black holes could be the missing piece of the NGC 6101 puzzle.

"The next step would be to look at other globular clusters which also have strange profiles" and see if black holes can explain those as well, Peuten said in the video, adding that this "would help us to understand how black holes are created and how black holes evolve."