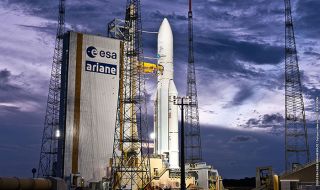 The Guiana Space Center is a facility used by the European Space Agency and the French government to launch satellites into space. The center is located near Kourou in French Guiana.

The French government began launching satellites there in 1964, and offered to share it with the European Space Agency when the latter was created in 1975. ESA contributes two-thirds of the spaceport's annual budget every year. The spaceport has also been used for launches for the United States, Japan, Canada, India and Brazil, among other countries.

Like many launch sites worldwide, Kourou is located near the equator. Its latitude is 5 degrees 3 minutes north, ESA says, which makes it a good location to launch missions that will operate at or near the equator. That's because the Earth's rotation acts as an extra source of propulsion for the rocket as it brings the satellite into space, saving fuel and money. It also allows for satellites to be heavier since less fuel is required.

French Guiana is also only lightly populated, with about 90 percent of the country covered by forests rather than human habitations. It's in a zone that is not prone to earthquakes or hurricanes, and its launch angle of 102 degrees allow for several kinds of missions to launch to the east or the north.

In 1962, the French space agency (CNES) started to look for a launch site close to the equator. Fourteen sites were considered among several selection criteria. Some of those criteria included political stability, the existence of a port and an airport, and enough geographical area to ensure launch security, CNES said on a webpage written in French.

On April 14, 1964, Prime Minister Georges Pompidou officially chose Guiana due to numerous attributes, such as its location near the equator, its small population, its excellent access to the Atlantic Ocean, its stable climate and the fact that there was already some infrastructure in place that could be expanded for a future space site.

The spaceport's first mission was in April 1968, when the liquid-propellant French Veronique sounding rocket lifted off, according to launch provider Arianespace. Other missions followed, with the Diamant B launch vehicle (starting in 1970) and the European Europa launcher (1971). After the Europa program ended, European launch programs continued with the Ariane series (which is ongoing today).

Ariane initially operated from the ELA-1 Launch Complex (the same complex that Europa used) between 1979 and 1989, during which time 25 Ariane vehicles were launched. (The facility is now being repurposed for Arianespace's forthcoming Vega set of lighter rockets.) ELA-2 saw 116 launches of the Ariane 2, 3 and 4 launch vehicles between June 1998 and February 2003.

ELA-3 began operations in 2008 for heavy-lift Ariane 5 launches. The program is still ongoing and is well-known for launching all five Automated Transfer Vehicle cargo ship to the International Space Station between 2008 and 2014. Arianespace's medium-launch Soyuz rocket also began operations at Guiana in 2011.

Excluding launches of various new rocket types by Arianespace, here are some of the notable missions that took place in the past few years (or will very shortly) after a launch at the Guiana Space Center.

March 2, 2004: An Ariane rocket launched the Rosetta mission that made its way to Comet 67P/Churyumov–Gerasimenko, arriving in August 2014. After three months mapping the surface, Rosetta deployed the lander Philae that touched down on Nov. 12, 2014. Philae was supposed to hook into the comet's surface, but the harpoons failed to deploy after a decade of being in space. The solar-powered lander bounced several times and landed in a shady area, using its dwindling battery power to do just over 60 hours of work on the surface. Rosetta continued studying the comet for almost two years. On September 30, 2016, controllers sent the spacecraft into a final plunge into the comet, ending its mission. The controlled dive came as the comet headed toward the outer solar system, where the spacecraft would not be able to continue to operate under solar power.

March 9, 2008: The first Automated Transfer Vehicle (named Jules Verne) left for the International Space Station. This series of five cargo vehicles was not only used to bring cargo to the orbiting complex, but also was studied to improve future space mission design. For example, sensors were used in the last mission, Georges Lemaître, which deorbited in 2015. Scientists were interested in seeing how the spacecraft broke up as it re-entered the atmosphere, and planned to use the information for future landing vehicles.

May 14, 2009: The Herschel and Planck space telescopes were brought into space together on an Ariane 5 rocket. Both observatories operated until 2013. Herschel, an infrared telescope, discovered molecular oxygen in space and also did studies of deuterium in the comet Hartley 2. The findings suggested some comets share the same kind of water as Earth. Planck mapped the cosmic microwave background, which is the leftover glow of the energy of the Big Bang.

March 2021: Though its launch date has been pushed back several times, the James Webb Space Telescope is expected to launch from the center. The telescope is a next-generation successor to the Hubble Space Telescope, and will be most powerful in infrared wavelengths. JWST's mission is to uncover the origins of the universe, including when the first galaxies formed. The telescope is also able to examine exoplanets and perhaps probe the atmospheres of some of the closer and larger ones, which would be a huge boon to that field of science since atmospheric studies are mainly theoretical right now.