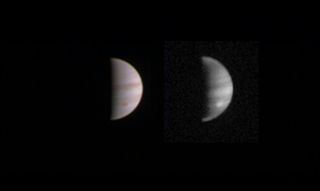 NASA's Juno spacecraft is about to get its first up-close look at the king of planets.

And Juno will have all of its science instruments during Saturday's flyby. This was not the case during the spacecraft's only previous close approach to Jupiter, which occurred July 4 when Juno arrived in orbit around the giant planet.

"Back then, we turned all our instruments off to focus on the rocket burn to get Juno into orbit around Jupiter," Juno principal investigator Scott Bolton, of the Southwest Research Institute in San Antonio, said in a statement today (Aug. 26).

"Since then, we have checked Juno from stem to stern and back again," Bolton added. "We still have more testing to do, but we are confident that everything is working great. So for this upcoming flyby Juno's eyes and ears, our science instruments, will all be open. This is our first opportunity to really take a close-up look at the king of our solar system and begin to figure out how he works."

The $1.1 billion Juno mission launched in August 2011, tasked with mapping out Jupiter's magnetic and gravitational fields and determining the planet's interior structure and composition, among other goals.

On July 4, Juno arrived at Jupiter after a nearly five-year deep-space trek. The spacecraft is orbiting Jupiter on a highly elliptical path that goes over the gas giant's poles; Juno is scheduled to make a total of 36 close flybys before its primary mission ends in February 2018, NASA officials said.

During Saturday's close pass, all eight of Juno's science instruments will be collecting data, and the probe's visible-light imager, known as JunoCam, will take close-up photos.

But don't expect to see these shots right away.

"A handful of JunoCam images, including the highest-resolution imagery of the Jovian atmosphere and the first glimpse of Jupiter's north and south poles, are expected to be released during the later part of next week," NASA officials wrote in the same statement.