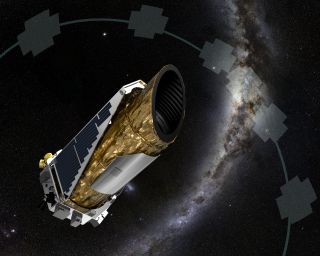 During a scheduled contact session on July 28, Kepler's handlers discovered that the observatory's photometer — the camera-like tool it uses to detect alien planets — had turned off. But the instrument powered back on again, and Kepler resumed "autonomous science operations" on Monday (Aug. 1), mission team members said.

"We will confirm that [normal] science operations have been resumed within a week," Kepler mission manager Charlie Sobeck, of NASA's Ames Research Center in Moffett Field, California, wrote in an update today (Aug. 5). "The team is currently investigating the cause; the spacecraft is otherwise operating normally."

The $600 million Kepler mission launched in March 2009, tasked with determining how common Earth-like planets are throughout the Milky Way galaxy. The spacecraft detects alien worlds by noting the tiny brightness dips they cause when crossing their host stars' faces from Kepler's perspective.

Kepler's primary observing campaign came to a halt in May 2013, when the second of its four orientation-maintaining "reaction wheels" failed, robbing the telescope of its superprecise pointing ability. But Kepler's handlers soon figured out how to stabilize the observatory using sunlight pressure and the two remaining wheels, and, in May 2014, Kepler embarked on a new mission called K2.

The spacecraft is still hunting for exoplanets during K2, but on a more limited basis. It's also studying a wide variety of cosmic objects and phenomena, during a series of shifting 80-day "campaigns." Kepler is currently in the middle of K2's 10th campaign.

To date, Kepler has discovered more than 2,300 exoplanets — about 70 percent of all known alien worlds — along with several thousand other "candidates" that await confirmation by follow-up observations or analysis. One hundred twenty-eight of the confirmed alien planets have been spotted during the K2 mission, NASA officials said.

Editor's Note: This article has been updated to note the correct cost of the Kepler mission, $600 million.