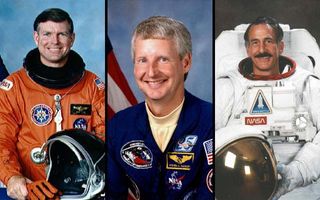 MichaelCoats, Steven Hawley and Jeffrey Hoffman were chosen by a committee of pastenshrinees, former NASA leaders, historians and journalists to be the 2007class of Hall of Fame inductees. The three will be honored with an evening galaand public ceremony to be hosted on May 4 and 5 at NASA's Kennedy Space Centerin Florida [image].

Coats,Hawley and Hoffman became astronauts in 1978 among the first recruited class ofshuttle crew members, unofficially called the Thirty-Five New Guys. Coats andHawley flew in space together and Hawley and Hoffman serviced the Hubble Space Telescope,though on different missions. While all three are retired from the NASA astronaut corps, they continue toserve the United States' space program today.

Almost 30years before he took the helm of Johnson Space Center as its director, Coatscame to the Houston facility to train for an eventual three shuttle missions. ANaval Aviator and test pilot, he flew his first space flight as pilot of themaiden launch of orbiter Discovery. After overcoming the first pad abort of theprogram, Coats and his STS-41D crewmates deployed a prototype solar array andreleased three satellites in 1984.

Coatssecond flight was also his first command, again on Discovery for mission STS-29[image].Only the third launch after the loss ofChallenger in 1986, Coats' crew deployed a Tracking and Data RelaySatellite and performed a space station "heat pipe" radiatorexperiment. After five days in orbit and 3,000 photographs taken of Earth,Coats landed the orbiter in California on March 18, 1989.

Coats leftNASA soon after his last flight for the private aerospace sector, holdingmanagement positions at Loral Space Information Systems and with LockheedMartin's Space Systems Company, where he was most recently vice president ofadvanced space transportation. In Nov. 2005, Coats returned to NASA as the 10thdirector of the Johnson Space Center (JSC).

Steven Hawley'sfirst space flight was with fellow 2007 inductee Mike Coats aboard STS-41D. He,Coats and his four fellow crewmates were dubbed the "Icebusters"after they successfully knocked free ice from Discovery's side using itsrobotic arm.

Hawley nextflew as a mission specialist on STS-61C, a six-day mission that returned toearth just 10 days before the Challenger accident in January 1986. His crew,which included Congressman (later to be Senator) BillNelson, deployed a communications satellite. During the mission, Hawleyconducted the first quantitative observations of the shuttle "glow"phenomenon, wherein the orbiter's side facing the atmospheric wind wouldexhibit a bright orange glow. He also operated a small telescope to view galactic gasclouds in ultraviolet.

The Hubble Space Telescopetook the center stage for Hawley's third and fourth space flights. In April1990 on STS-31, Hawley and his crewmates deployed the orbiting observatory fromDiscovery's payload bay. Hawley and Discovery returned to the telescope sevenyears later to upgrade Hubble and install new equipment. Hawley used theshuttle's 50-foot (15-meter) robotic arm to retrieve and re-deploy the 44 foot(13 meter)-long scope during the STS-82mission.

Hawley'sfinal flight focused on a different telescope, the ChandraX-ray Observatory, which was deployedin July 1999 during his STS-93mission. He also led the use of a small payload bay-mounted telescope toobserve solar system objects,many for the first time in the ultraviolet.

A formerdeputy chief of the astronaut office and director of flight crew operations,today Hawley is the director of astromaterials research and exploration sciencefor JSC.

LikeHawley, an astronomer, Jeff Hoffman is a veteran of five shuttle missions andwas the first to log 1,000 hours aboard the space shuttle, recording a careertotal of over 1,200 hours in space.

Hoffman,with STS-51D crewmate David Griggs, made the shuttle's first unscheduledspacewalk in April 1985, attaching a makeshift "flyswatter" toDiscovery's robotic arm. The unplanned EVA was performed as part of an effortby the crew to engage a malfunctioning satellite that they had deployed earlierin the mission. During the flight Hoffman and his crew also recorded howvarious popular children's toys operated in space, resulting in a very populareducational outreach program for students.

Hoffman'ssecond mission was the first shuttle flight dedicated to astronomical research,flying the ASTRO-1 ultraviolet astronomy laboratory, a project on which he hadbeen dedicated to since before his first launch. The mission featuredround-the-clock observations of the celestial sphere in ultraviolet and X-rayspectrums using a payload of four telescopes.

Hoffman wasnext named STS-46 payload commander, launching on Atlantis in 1992. He and thecrew released the EURECA free-flyer and conducted the first test flight of theTethered Satellite System (TSS), a joint project between NASA and the ItalianSpace Agency (ASI) that strove to demonstrate that electricity could begenerated by dragging a tether-attached probe through the Earth's magneticfield. Hoffman flew again with the TSS in 1996 aboard STS-75.

Hoffman wasalso a member of the first Hubble Space Telescope servicing mission, STS-61, in1993. During that flight, he performed three spacewalks to replace and installinstruments inside the observatory, which in part corrected for an optical flawthat had limited the Hubble's on-orbit use since being deployed.

Afterleaving the astronaut corps, Hoffman represented NASA in Europe, where heworked as a liaison between the U.S. space agency and its European partners. In2001, he was seconded by NASA to the Massachusetts Institute of Technology,where he is currently a professor in the Department of Aeronautics andAstronautics.

To beeligible for induction, an astronautmust have made his or her first flight at least 20 years before the inductionyear and must have retired from NASA's astronaut corps for at least five years.A candidate must be a U.S. citizen, NASA-trained and must have orbited theEarth at least once.

Inballoting, committee members evaluated not only an individual's flightaccomplishments but also how he or she contributed to the success and futuresuccess of the United States' space program in post-flight assignments.

TheAstronaut Scholarship Foundation (ASF) will host a gala honoring the 2007inductees at NASA's Kennedy Space Center's Apollo-Saturn V Center on May 4. Thefollowing day on May 5, a public induction ceremony will be held at the spacecenter's visitor complex in Florida.